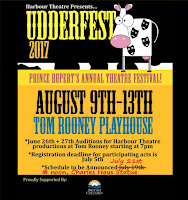 Prince Rupert's annual theatre festival Udderfest is but a few weeks away and just what is in store this year will be revealed on Friday, as Harbour Theatre outlines the schedule for the popular event set to run from August 9th to 13th.

The Charles Hays statue at City Hall is the destination for those looking for their sneak peak at the August schedule with the festival launch event set for Noon to 1 PM.

You can enter to win a draw for an unlimited Golden Ticket Theatre Festival Pass, while Three passes will also be available to purchase for but 25 dollars at the time of the launch.

Auditions for this years event took place at the end of June, with the registration process for participating acts closed as of July 5th.

More on Friday's noon hour reveal can be found on the Facebook page created for the Festival launch.

The festival brings not only some of the best in local theatre talent to the stage of Third Avenue West's Tom Rooney Theatre, but also attracts travelling troupes from across the Northwest and in some years beyond the region.

More note on Community events on the North Coast can be reviewed here.