Word of Tuesday's cancellation of the Pacific NorthWest LNG project spread quickly around the region and for the regions environmental movement members there was much to celebrate about the decision.

Across the Northwest groups which had frequently expressed their opposition to the proposed development at Lelu Island took to their Social media platforms, eager to share their enthusiasm at the end of the PNW LNG story for the region.

Among the groups sharing word of their success were the Prince Rupert Environmental Society and Friends of Wild Salmon which offered congratulations to their supporters for their efforts during the five year process that put the spotlight on their concerns. 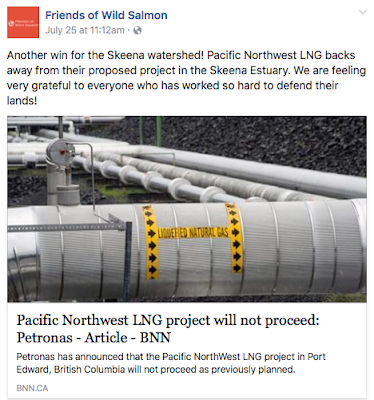 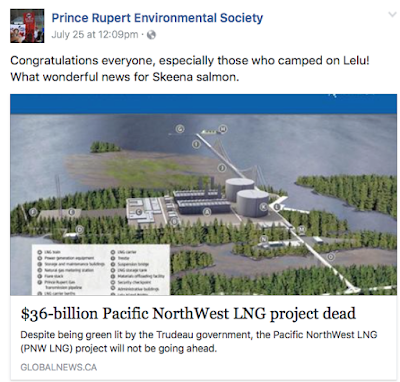 The World Wildlife Fund also hailed the news of the cancellation of the project, noting how it was a win for wildlife not only in the Skeena estuary, but  across British Columbia.

Also Included in those that were in celebration mode was the Prince Rupert office of UFAWU-Unifor which posted their thoughts to Facebook on Tuesday.

The local union that represents fish workers in the community had long been in opposition to the proposed development at Lelu Island, with UFAWU's Joy Thorkelson frequently raising the topic in her role as a city councillor with the City of Prince Rupert. 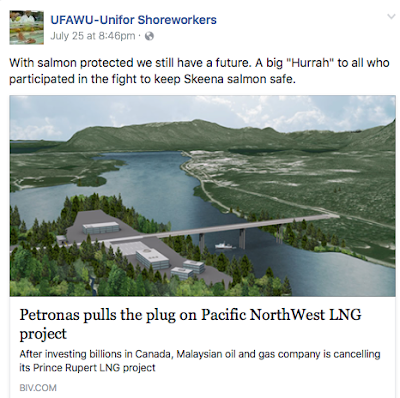 In addition to the social media shout outs, a group in Prince Rupert celebrated the decision to bring the project to an end, gathering in Mariner's Park on Tuesday following the announcement.

North Coast MLA Jennifer Rice also touched on the theme of Flora Banks in her Wednesday statement on the demise of the project, noting how some in the community were celebrating the protection of salmon habitat off of Lelu Island.

In a Tuesday evening statement, NDP MP Nathan Cullen also noted that much of the opposition to the project came from the site selection and a lack of Social Licence for the proposed development

A look at some of the fall out and opinion sharing on the Petronas decision can be found on our archive page here.
Posted by . at 8:49 AM