CIHL faces challenging year ahead with indications of Steelheads departure

The course of attrition for the CIHL could be set to continue into the 2017-18 season, with indications out of Smithers that the Steelheads will cease operations for the year ahead, owing to an inability to gain commitments for their playing roster.

The first indication of troubles on the horizon came earlier this month when the Steelheads indicated some trouble in attracting enough players to ice a team for the upcoming season. 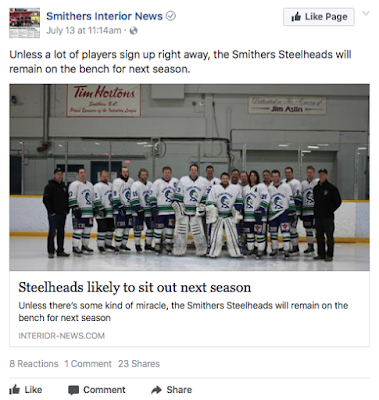 Last week, the Smithers based Interior News noted that unless there is 'some kind of miracle' the Steelheads would remain on the bench for the year ahead.

For those looking for a faint hope for the Smithers squad, the Steelheads still have ice time booked at the Pond in Smithers and the deadline to cancel that commitment doesn't arrive until August 15th, so should their be a surge of players ready to commit, the season could be salvaged for the team.

The Steelheads situation is not a unique one and is indicative of the struggles for the Senior Men's circuit as population levels ebb and flow across Northern British Columbia.

The numbers game this time around seemingly makes the the icing of a team for the Bulkley Valley in flux, leaving the Steelheads to join a list of squads that at one time had taken the CIHL listing ten cities as member communities.

Over the last few years the league has seen the departure of Lac La Hache, Vanderhoof, Houston and New Hazelton, some of the concerns were related to arena access, others were related to an inability to secure player commitments.


Still ready to lace up the skates for the year ahead are defending champion Terrace River Kings, perennial powerhouse Williams Lake Mustangs and the North Coast's own Prince Rupert Rampage.

Things were touch and go for a period for the Kitimat Ice Demons, that team like the Steelheads and others, has struggled at times to keep their roster intact.

In May the Ice Demons outlined the struggles they were facing for the year ahead, 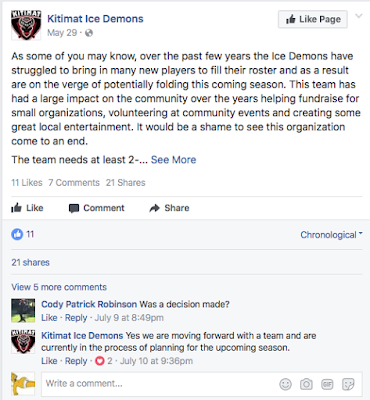 The Good News for CIHL fans in the aluminum city came from an update to that Facebook post  earlier this month, where the Ice Demons said they were ready to move forward for the season ahead.

The Quesnel Kangaroos round out the now five team circuit, though they too have sent out some warnings in the past about issues in their community, related to rink access and the ability to generate revenue may put their fate in peril.

Last fall, the Kangaroos and the City of Quesnel were not on the same page when it comes to fees for use of the new Twin Ice Arenas complex in the Cariboo city, as well as issues related to rink board revenues, areas where the team had issued concerns related to their economic feasibility.

The old ice arena is set for demolition as the city opens it's new facility.

The Cariboo communities have larger issues on their minds at the moment with their wildfire situation, so any update from the home of the Kangaroos and whether they have solved their concerns with the local government there is still an unknown.

The CIHL will no doubt be delaying the release of their 2017-18 season until the shifting landscape of their member cities settles a bit more.

Some notes on the summer so far for the CIHL can be found below:

More items related to the Prince Rupert Rampage and the CIHL can be found here.
Posted by . at 10:38 AM