Christy Clark steps down as leader of BC Liberals

Whenever the NDP government calls the Legislature to its return, there will be one long time fixture from the recent BC political scene missing from the Chamber.

Friday morning, BC Liberal leader Christy Clark announced her intention to step down as leader of the party and her plans to leave politics.

Ms. Clark who served as British Columbia's 35th Premier from 2011-2017 delivered a short statement that expressed her pride in what the BC Liberals had accomplished and confidence for the future of the province.

Her resignation, which follows the agreement between the NDP and Greens which propelled Mr. Horgan to power, will take effect on Friday, August 4th.

The BC Liberal Facebook page shared the text of Ms. Clark's resignation in a posting. 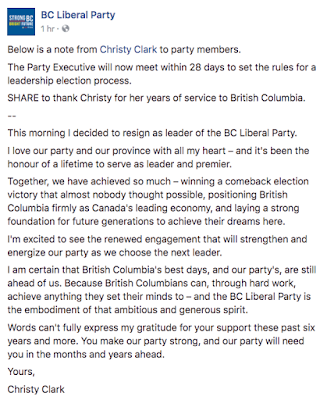 With the Liberals now soon to be focused on the selection of a new leader, the announcement of Ms. Clark's departure from the political stage will now seemingly provide Premier John Horgan's government with some additional breathing room to settle into their political agenda.

Political pundits will now be reviewing the last few weeks for clues as to whether Ms. Clark has chosen to exit the stage of her own accord, or if the wheels were put in motion by party officials to suggest that her time as leader was at an end.

The Party executive will now meet within 28 days to set the rules for the leadership election process. Rich Coleman, the former Deputy Premier and LNG Minister will take over the leadership on an interim basis as the BC Liberals move forward with their work ahead.

The summer months and the fall will now offer up the manoeuvring of potential leadership candidates for the BC Liberals, both from within the current legislature line up and outside of the seat of the Provincial government.

The seismic waves of the shift in the political landscape in BC have already produced a range of news items and commentaries, with much more yet to come through the weekend.

We will archive those notes below:

More notes related to the North Coast in the Legislature can be found here.
Posted by . at 11:56 AM

Email ThisBlogThis!Share to TwitterShare to FacebookShare to Pinterest
Labels: Christy Clark resigns as BC Liberal leader and MLA