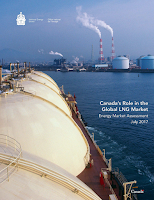 A late entry by Canada into the LNG sweepstakes means that the next several years are going to be critical towards any development of a Canadian LNG industry, that is the main thrust of a new report from the National Energy Board.

The NEB which oversees the Canadian energy sector released its report "Canada's role in the Global LNG market" with the document exploring the fast changing LNG market dynamics, including the shifting nature of pricing towards the lower end of the spectrum and the increased level of global competition in the development of the industry.

The report traces some of Canada's past history in the development of LNG and the shipment of the resource from Canadian ports, noting that to this date there is only one facility in the nation that can handle LNG, and that facility, the Canaport LNG terminal located in New Brunswick is actually one that imports gas from North Sea and the Caribbean for use in Atlantic Canada.

As for the prospects of Canada becoming a global exporter, the NEB report traces the recent export plans for British Columbia, with the majority of the proposed terminal locations set for the North Coast.

The report makes note of the prime location for those terminals providing access to Asian markets for the gas resources of Northeast BC and Alberta.

There are more proposed LNG projects on the West Coast than on the East Coast. This is because there is significant gas supply in northeast B.C. and Alberta and many of the largest LNG project proponents are also gas producers in western Canada aiming to maximize the value of their producing assets by seeking alternate markets.

Secondly, the West Coast is a shorter distance to the primary target market of Asia. Consistent with this, many proposed Canadian LNG projects have investors from countries such as Japan, Korea, China, and India. Some of these Asian proponents have already entered into long-term contracts with their project partners to buy a portion of the Canadian-produced LNG.

The report also notes that not all of the proposed LNG projects are likely to be built and acknowledges how despite regulatory approvals, most proponents are waiting for market conditions and project economies to improve before issuing any final investment decisions.

The report also explores how the US and Global industry has grown and the challenges that those recent development pose for the still incubating Canadian industry.

To this point, there has been only one major project in the Prince Rupert area that has seen any forward momentum, with the Pacific NorthWest LNG project having received Federal approval in September of 2016.

Petronas, the Malaysian energy giant which is the parent company for Pacific NorthWest LNG is still working through its internal review process, with little information released by the company since September as to when a Final Investment Decision  will be made and if the much discussed go ahead for the project may be made.

The report did not explore the role of politics in the future of Canada's still developing LNG industry, the recent change of government in Victoria could also be one area that could best be listed under Uncertainties.

How Premier John Horgan addresses the issue of LNG development, while seeking to continue to hold the support of Green Leader Andrew Weaver and his two MLA"s in the Legislature may be a wild card when it comes to how the new NDP government will approach LNG proposals in the province.

You can review the full report from the NEB here.

The latest notes on the many proposed LNG projects for the North Coast can be reviewed from our LNG archive page here.
Posted by . at 9:20 AM