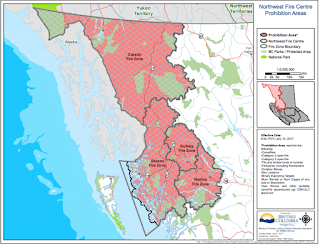 With a week of hot weather on the horizon and a long weekend coming our way, the Northwest Fire Centre has once again reissued the current Campfire Ban that is in effect for the region.

Key to their announcement was an emphasis on the current wildfire situation in the rest of the province and the need to maintain response levels in those locations.

Although sufficient firefighting resources remain in the Northwest Fire Centre to deal with current fire activity here, it is vital that BC Wildfire Service resources not be diverted to respond to unnecessary and preventable human-caused fires. Open fires, including campfires, present an unacceptable risk and detract from detection and response capabilities by increasing the number of “false alarm” smoke chases and nuisance fires.

You can review the full announcement from the Northwest Fire Centre here.

Whether that means that the City of Prince Rupert and District of Port Edward will reverse their position on the fire bans in each community remains to be seen.

As of today, both Prince Rupert and Port Edward were allowing small cooking fires in the respective communities.

The Most recent updates for the Cariboo wildfires can be reviewed here.

More background on the forest fire situation in BC can be found on our archive page here.

Further notes related to Emergency Responders in the Northwest can be reviewed here.

Update: Terrace which like Prince Rupert and Port Edward had previously lifted its ban on small fires has once again reinstated it, issuing a public notice on Tuesday.
Posted by . at 9:04 AM