BC Liberals mark February on the calendar for leadership convention

Unless there is a major split between John Horgan and Andrew Weaver popping up over the next few months, the NDP  it seems will  have a clear run to get their governing skills to top gear ... at least until February

The opposition Liberals apparently are not in any great hurry to find a replacement for the now departed Christy Clark, with BC Liberals releasing some of the details to their process of selecting the next leader of the party.

Party President Sharon White, part of the leadership rules committee which includes Rupertite Don Silversides, outlined how it all will work with an information release on Tuesday,  highlighting the plans to make use of a preferential ballot that will allow for members of the party to select their new leader.

What in effect is now a five month job interview for the leadership will come to an end on the weekend of February 2nd to 4th, making use of online and telephone options.

Towards that process the BC Liberals are currently seeking a vendor to provide a secure voting service and auditor to oversee the process.

Former BC Attorney General Geoff Plant will be serving as the Chief Returning Officer to ensure that compliance to the rules is upheld through until the February 4th weekend.

That date may not deliver the best television ratings however for the Liberals, as Global BC's Keith Baldrey made note of through twitter yesterday, there's something else happening that weekend that may just outshine the prospect of a new leader for the BC Liberals.

Football concerns aside, President of the Party Sharon White outlined how the BC Liberals have taken elements from previous leadership contests for the 2018 process and hailed the level of review that Mr. Plant will bring to the five month journey.

“The Leadership 2018 rules are rooted in best practices from our previous leadership race and other contests across Canada, and informed by feedback from our grassroots members throughout the province ... We’re all looking forward to a vibrant contest of ideas that will engage British Columbians and select a leader ready to stand up for BC and decisively win the next election. And there is nobody better to oversee this process with the utmost fairness and transparency than Geoff Plant.”

As the campaign to replace Ms. Clark heats up, the Liberals will be holding party-sponsored debates in a number of British Columbia communities, with Vancouver, Surrey, Prince George, Nanaimo and the Thompson-Okanagan region all listed as debate hosts.

There does not appear to be any plans in motion at the moment that would see the Northwest area play host to any leadership forums.

Any interested candidates for the leadership of the party have until December 29th to file their registration papers.

That date of December 29th also marks the deadline for any interested British Columbians to join the party, or to renew their memberships in order to participate in the vote. The cost of membership for the BC Liberal party is ten dollars for four years or five dollars for those from 14 to 25 years of age.

More notes related to the Leadership campaign ahead can be found here.

With the Legislature set to return to work on September 8th, those Liberal members of the Legislature with an interest in the leadership will be making use of the additional spotlight of opposition to build up their image for party members.

While the elected MLA's on the Liberal side show off their stuff in the Leg, those outside of Victoria with an interest in the position will also begin to launch their campaigns before the end of December.

So far there have been a few Liberals to show some interest in the post, but no major declarations have been made to this point.

You can follow some of the latest notes related to the BC Liberal leadership race from our political portal D'Arcy McGee, we have created a Liberal leadership tracker page there, providing for updates on who may or may not be in the running for the job.

A wider overview of political developments in British Columbia can be found as part of our Victoria Viewpoints feature on that portal.

For items of interest related to the legislature from a Northwest perspective, see our Legislature archive here.

Update: It would seem the prospect of all that chip and dip going to waste at the Liberal's party has given cause for a revised schedule for the Leadership convention!

Now Liberals can enjoy both political football and the four down version on the same weekend! 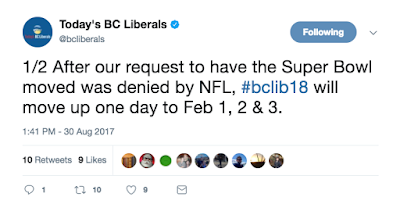