A notice first posted to the Facebook Social Media stream in Prince Rupert has raised an alarm for some residents of the community, with a number expressing their concerns over the potential fate of the Greyhound bus Service from the North Coast inland to Prince George.

According to some information sharing now available through the Gitmaxmak'ay Nisga'a Society Facebook page, Greyhound is said to be preparing an application to cancel the Prince Rupert run, with the application process to be launched on September 11th. 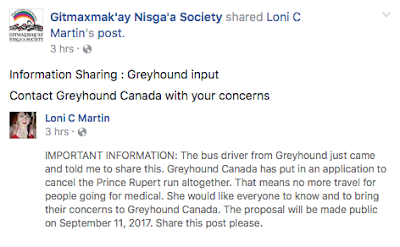 If Greyhound does move forward with such a plan, the first official notice for the public will come through the Provincial Transportation Board, which will then call for comments from any residents of the province that may be affected by the abandonment of service.

The information listings from the PTB can be found here.

Greyhound has made service reduction requests related to the Prince Rupert to Prince George route in the past and have frequently made note of the struggles that they have had in providing service along the Highway 16 corridor, originally outlining their concerns related to introduction of the Northern Health Connections service.

More recently the transportation company has expressed their concerns when it comes to the impact on their service as part of the launch of a community based transportation option along Highway 16.

That transportation project has come into service through the financial assistance of the Provincial Government's Highway16 initiative.

Prince Rupert was one of the few communities not to take part in that provincial initiative, with the City of Prince Rupert instead putting its focus and support towards the transportation plan offered through the local social service agency North Coast Transition Society

At that time, the province had indicated that they were still hopeful that the North Coast would join in on the region wide transportation plan.

Earlier this month, both Mayor Brain and the North Coast Transition Society reminded residents of that travel program with some information notes through social media. 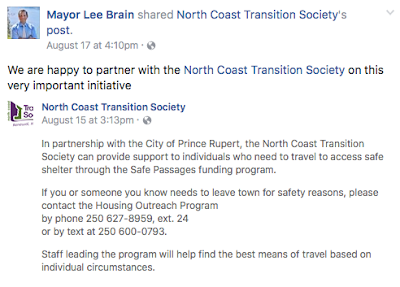 How the current plan as offered by the Transition Society may be impacted by any change in highway transportation out of Prince Rupert could make for a theme of conversation in the community, should September 11th bring the request from Greyhound to abandon the route out of the city.

The last major route reduction for Greyhound came back in 2012, at that time the Prince Rupert City Council which was led by Mayor Jack Mussallem raised their concerns with both Greyhound and the Passenger Transportation Board with a number of correspondences towards the issue.

City Council jumps on the "Stop the Greyhound Cuts" bus

Despite the efforts of municipal politicians across the region, the route reduction request was approved in January of 2013.

We will keep watch on the Transportation Board news releases through the month to seek out further information on the status of the transportation options in the Northwest.

More items related to transportation along Highway 16 and other routes in the Northwest can be found on our archive page.
Posted by . at 1:58 PM