Another element of the city's expansion of the Ridley Island landfill site is now underway, as the City of Prince Rupert invites bids for providing construction services related to the electrical requirements for the new

A bid package posted to the province's BC Bid website provides the details for the project, which will include site preparation, excavation, drilling, blasting, concrete and earth work.

As well, the project will require the installation of electrical transformer with auxiliary equipment, electric kiosk and infrastructure, as well as trenches, conduits and cables.

The final day for submissions for the bid process is Friday August 25th. 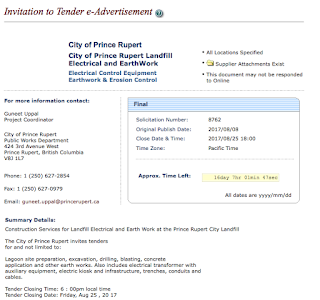 The timeline for the work would see the City award the contract on August 30th, with work expected to be underway on Monday, September 4th.

Substantial performance on the project is expected to be achieved by March 20th of 2018, with total performance required on or before April 20th.

You can review the full bid package from the BC Bid Website.

Earlier this summer, the city issued notice of the first bid related to the project, seeking a request for Bids for the Leachate Lagoon Construction project.

Much of the funding from past landfill work has been accessed through grant funding at federal and provincial levels.

The path towards landfill expansion first began back in 2014 when the Council of the day examined the need and put in motion the planning for required work at the Ridley Island site.

Some of the background to the project can be found below:

More notes related to the city's infrastructure planning can be found on our archive page.

Further background on City Council discussions can be reviewed from our Council archive page.