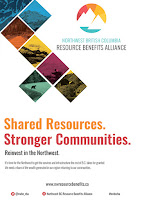 A delegation of members of the Northwest Resource Benefits Alliance recently met with officials of the new NDP government in Victoria, and when they came out of their meetings with provincial team,  the Northwest delegation offered up some enthusiastic reviews of their get together.

As part of their engagement on a number of resource topics, the group met with  a range of provincial officials which included Doug Donaldson, Minister of Forests, Lands, Natural Resource Operations and Rural Development, Selina Robinson, Minister of Municipal Affairs and Housing, Carole James, Minister of Finance, Jennifer Rice, Parliamentary Secretary, Emergency Preparedness.


Resource Benefits Association Chair Bill Miller seemed to capture the spirit of the engagement with the provincial government group with a statement issued today:

“We commend the new BC NDP government’s steadfast commitment to the RBA,  ... Revenue sharing is the single most important issue to Northwest BC communities. We are pleased and grateful that the ministers, Mr. Weaver and senior staff made time for us and offered such strong support at this very busy time of transition for the government.”

Following the meetings, Prince Rupert Mayor Lee Brain expressed his confidence as to how he sees the process moving forward.

“The provincial government will now determine which ministry and senior staff representatives will lead negotiations with the RBA, ... The ministers are already familiar with the RBA issues, so we are confident that the right team will be put together quickly.”

For his part, Kitimat Mayor Phil Germuth outlined his observations on how the collective engagement could bring the entire Northwest closer to reaching its economic potential.

“One of the main messages we heard from the ministers was how important and significant it is to have all 21 local governments from Vanderhoof to Masset, working together,  ... Coming together in solidarity on an issue that faces all of us is going to be key to ensuring the Northwest gets what it needs to move from a have-not region to achieve its full potential.”

The northwest delegation noted that they had received an overwhelming reaffirmation from the NDP provincial government of their election promise to begin negotiations for a revenue sharing agreement fit for the Northwest, with those discussions expected to begin in earnest later this fall.

The municipal and regional officials will re-connect with their provincial counterparts next month, when British Columbia's local government leaders assemble at the annual Union of BC Municipalities conference in Vancouver.

The full statement from the organization can be reviewed here.

A short overview of what the Alliance hopes to achieve from its negotiations with the province can be examined here.

You can learn more about the efforts of the Northwest Benefits Alliance from their website  and Facebook page.

For more items related to the provincial government see our Legislature archive page here, while a larger overview of provincial issues can be found on our portal D'Arcy McGee.
Posted by . at 10:53 AM