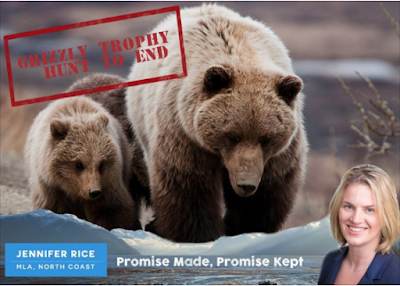 On Monday, the new NDP Government led by Premier John Horgan outlined its plans to bring to an end the annual Grizzly Bear Trophy Hunt in British Columbia.

Monday's announcement means that this years hunt, which is officially underway in the Peace country as of today, is set to be the last in the province.

Doug Donaldson, the Minister of Forest, Lands, Natural Resource Operations and Rural Development made the announcement, providing the background to the government's plan to bring the hunt to an end.

“By bringing trophy hunting of grizzlies to an end, we’re delivering on our commitment to British Columbians, This action is supported by the vast majority of people across our province.

In particular, we owe it to generations past and future to do all we can to protect the beauty and uniqueness of the Great Bear Rainforest. We believe the action we’re taking goes beyond the commitment to Coastal First Nations made as part of the 2016 Great Bear Rainforest agreements.”

The news was greeted with enthusiasm by North Coast MLA Jennifer Rice, who in a Facebook post this morning noted that the end to trophy hunting for Grizzly Bears was a promise made to citizens by the NDP, reflecting how the hunt is "not within our collective values". 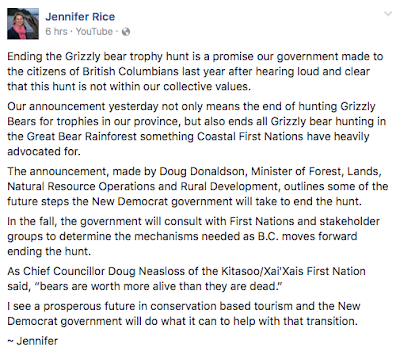 To go with her update on the NDP announcement Ms. Rice included a You Tube video, reviewing a discussion with Chief Councillor Doug Nealoss of the Kitasso/Xai'Xai  First Nation on the theme of the grizzly bears and wildlife management in the region.


It's estimated that there are some 15,000 grizzly bears in British Columbia, with 250 of the animals taken by hungers each year. While the trophy hunt will come to an end, hunting for meat will continue to be allowed in British Columbia.

The province will consult with First Nations and stakeholder groups this fall to work on a the next steps towards bringing the hunt to an end and engage in a broader consultation process on wildlife management.

More notes related to the end of the trophy hunt, which comes into effect as of November 30th can be found here.

Further background on notes of interest from the Legislature can be reviewed on our archive page, while more expansive notes on BC Politics can be found on our political portal D'Arcy McGee.
Posted by . at 1:09 PM