For many on Haida Gwaii and the North Coast, the memory banks only go back a few years when it comes to seismic movements on the Pacific Coast, with 2012's Haida Gwaii quake still somewhat fresh in our minds as a benchmark event for many in the region.

However, on this date back in 1949 an even more historic temblor roared along the Haida Gwaii fault line as the Islands were ground zero of an 8.1 quake, the largest event ever recorded by monitoring mechanisms in Canada.

That seismic shift of the plates along the North Pacific fault lines marked the largest earthquake in the nation since the 1700's and put the region in the news for days following the seismic shifting.

This account from Natural Resources Canada offers up just a small glimpse into the impact of the event, one which was felt in Prince Rupert, Terrace and far beyond the Northwest.

John Cassidy, a researcher with Natural Resources Canada provided a few snapshots of his own yesterday in the lead up to the anniversary of the massive Queen Charlottes quake. 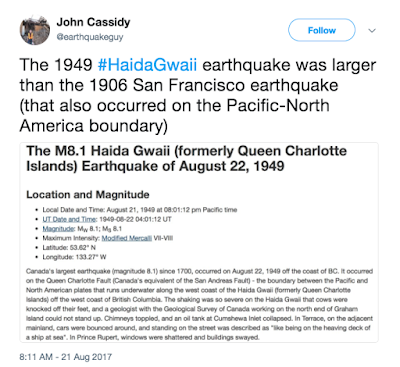 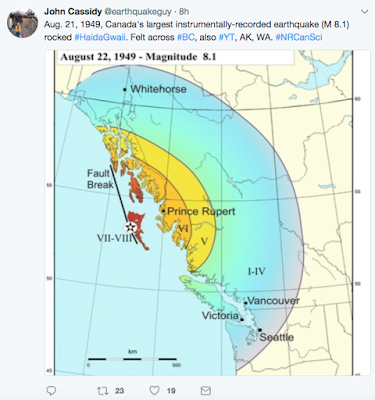 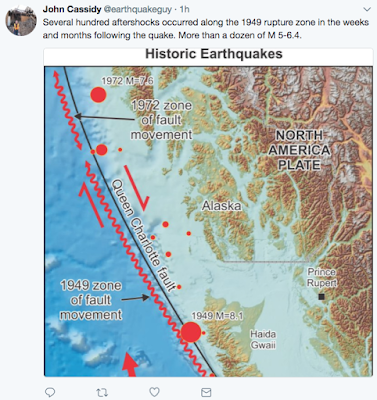 Some further background on the 1949 quake also highlights the very active nature of the fault lines of Haida Gwaii with this CBC best of list featuring a number of the seismic shifts through the years.

Other notes recounting the Giant quake of 49 include:

The October 2012 quake was slightly less in intensity at a magnitude of 7.7 but did echo some of the findings from the 1949 event. Much like the quake a half century prior, it too was felt on the North Coast and into the Northwest interior regions and provided for a number of aftershocks well into the next few months.

Our archives from the North Coast Review tracked some of the events from that temblor of almost five years.

More recent notes of earth movements both on Haida Gwaii and along the Northwest coast of North America can be found on our archive page here.

Email ThisBlogThis!Share to TwitterShare to FacebookShare to Pinterest
Labels: Anniversary of the Haida Gwaii quake of 1949