The mystery of the departing journalist has now been solved, with North Coast MLA Jennifer Rice apparently making an offer  that couldn't be refused for one time (and short time) Northern View journalist Joseph Jack.

The short lived tenure with Black Press and Podcast fame in Prince Rupert ended with nary a farewell to be found on the home deliveries of the local parchment, or through their online portal.

With Mr. Jack making for a departure from the paper and heading a block to the west, taking him to a staff position with Ms. Rice's Prince Rupert offices.

It's an interesting hire, particularly considering the often mercurial commentary that the Northern View has provided on Ms. Rice's work in Victoria, with editorials that on many occasions have been quite cutting and at times rather snarky when it comes to her work.

Sadly, some of those past epic moments of editorial bombast and rant have been lost to the ages (that is short of a Best Of Edition from the publisher one day)  with the switchover to the Northern View's new online archive system.

That recent style makeover seems to have rendered much of the work from the paper prior to this spring for the most part now unavailable, unless of course you go old school and head to the Prince Rupert Library for a look through some of the dusty past issues archived there over the last four years or so.

However to recapture some of that combative spirit, the publisher recently made a return engagement on the editorial pages and was back in full flight featuring a return to the familiar bluster out of the Fraser Street fulcrum.

The most recent contribution from Publisher Todd Hamilton marked a return to the commentary page by offering up a bit of an "I told you so" piece, one which channels some of the spirit from his many previous works.

North Coast received what they voted for by electing NDP

When you consider some of the past history between the MLA and the Publisher since he arrived on the North Coast in 2012, the hiring of the former reporter could be a case of some serious poaching of talent that Ms. Rice has done, spiriting the new hire away right under the nose of the publisher.

Though perhaps this article from the June 8th edition of the weekly paper was of some use in the job application process, offering a glimpse of what may come in the sharing of the word of Ms. Rice's work in Victoria for future editions of the MLA's newsletter and social media streams. 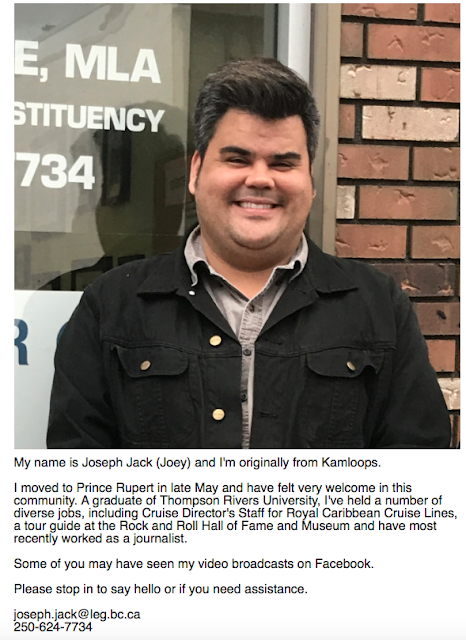 Also new to the North Coast office is Joshua McLeod who recently relocated to Prince Rupert from Haida Gwaii.

Both Mr. Jack and Mr. McLeod have been introduced to the local constituency through the first edition of Ms. Rices' revamped e-newsletter project.

More notes related to the North Coast MLA's work at the Legislature can be reviewed on our archive page here.

Further notes on political events in British Columbia can be found on our political portal D'Arcy McGee.

A review of some of the comings and goings with the regions media collective can be found here.
Posted by . at 8:46 AM