A new look at Provincial politics is on the horizon

For those that can never quite get enough background on provincial politics some good news in the offing, as an Ontario based publication makes its plans to enter the British Columbia new market.

An ad seeking a Victoria based reporter for a new publication called British Columbia Today has been listed, offering up a bit of a twist on the skill testing question aspect of employment searches. 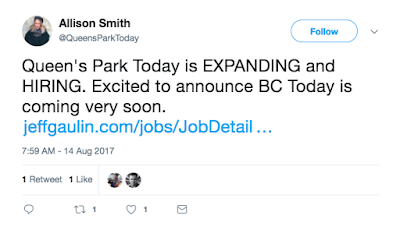 Beyond the listing of the required skills that BC Today will be looking for, samples of your past writing will be required to be attached to your application, along with answers to three questions requiring a paragraph of your finest observations:


1) Did Lieutenant Governor Judith Guichon make the right decision when she swore in John Horgan as premier? Why or why not? 2)

If you had to hold one cabinet portfolio in the Province of British Columbia, which would you want to hold and why?

3) Explain in your own words how a government bill will get passed into law under the current B.C. government.

We're not sure what the timeline of employment might be suggesting, with the full time job listed as a contract position that lasts four months, with a potential to renew

(perhaps BC Today doesn't expect the drama in BC politics, or the minority government situation at the Leg to continue beyond November).

Those with an interest in covering the Victoria beat for the new publication have until August 20th to submit their resumes and their essay observations on the questions provided.

You can review the full job ad here.

BC Today would appear to be heading towards a September launch, with the Legislature position set to begin at the end of August.

The subscription based journal in Ontario, is that of a newsletter style, numbering towards six pages or so each day, offering up a synopsis of the day's events  and appears targeted towards the public service, politicians, and those that interact with them on a daily basis.

A sample version of the Ontario version is available here, offering a glimpse as to what the BC version may look like once it hits the Internet.

Alison Smith, the publisher hosts a twitter feed that offers up political commentary through the day, as well as background notes on the Queens Park Today version of the service.

More notes related to Northwest representation at the Legislature can be found on our archive page here, while a larger overview of the political scene is available on our political portal D'Arcy McGee.

Email ThisBlogThis!Share to TwitterShare to FacebookShare to Pinterest
Labels: New publication set to watch over BC Politics