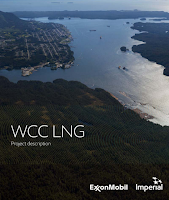 With two high profile LNG projects now put on ice by their proponents, the list of active potential LNG developments is dwindling from the heady days of a few years ago when there was a Gold Rush like feeling in the city when it came the prospect of construction of terminal locations on the North Coast.

However, as been chronicled through the last year, the North Coast has seen the abandonment of two of the highest profile projects, with both the Shell/BG Gas and Pacific Northwest LNG projects shut down by the large international energy companies that were proposing them.

That leaves the region with what appears to be two active LNG proposals still showing some signs of life.

One of them is the Chinese led Aurora LNG proposal for Digby Island which continues on towards its environmental process and continues to provide updates for residents on the pace of their development plans. 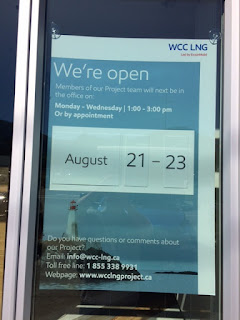 Another project, the WCC LNG proposal for Tuck Inlet has had a much lower profile over the last twelve months, with few indications from the proponents Exxon/Imperial of any imminent development and even less in the way of public engagement related to their plans during that period of time.

That however does not apparently mean that it isn't still under study, an information poster recently spotted in the windows of the office space on First Avenue East that is being used by WCC LNG notes that they will have representatives in town from August 21st to 23rd.

Over the course of those three days, the Project team from WCC LNG are set to be on site from 1 to 3 PM  and available to answer questions or received comments about the proposed development.

The WCC LNG proposal would see an LNG terminal developed north of the City's eastern edges along the eastern shoreline of Tuck Inlet. The most recent update on the proposed development came earlier this year with the release of their online newsletter Community Link, which offered up a review of some of their community engagement through 2016. 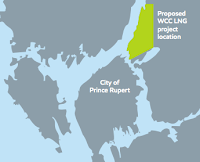 It noted that the company would be continuing with their field work at a reduced pace through 2017 and 2018.

With their return to their offices of next week, North Coast residents may learn a bit more about the Exxon plans moving forward and if we will see an increased level of activity related to the Tuck inlet location in the year ahead.

More notes of interest related to the WCC LNG project can be found on their website.

A copy of the project overview can be reviewed here.

A wider overview of the LNG picture on the North Coast and Northwest can be reviewed from our LNG archive page here.
Posted by . at 9:45 AM

Email ThisBlogThis!Share to TwitterShare to FacebookShare to Pinterest
Labels: WCC LNG offices to be open next week for community questions