A short update on the Transition Prince Rupert Facebook page is offering a bit of a timeline for what's ahead for the much discussed McKay Street Park Project.

In their notes for those that follow the community organization, Transition Prince Rupert pointed to absences over the summer months as to the reason for the slow flow of information related to the proposed redevelopment of overgrown brush land in the heart of the McKay/Kootenay area of the city.

Among their plans the organization plans to continue to reach out to local contractors and developers for in kind support to try to leverage funds for use on the project.

More information on their plans is promised as the group moves into the fall and determine what they can accomplish with the money to be dedicated to the remediation project that they have received to this point.

The full statement can be reviewed on their Facebook page here. 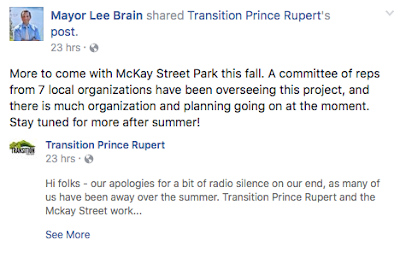 The updates perhaps are a response to some community concerns from the west side neighbourhood, with a number of Rupertites recently taking to a Facebook theme to express their frustration at the slow pace of movement when it comes to the project.

The community organization was successful in securing 100,000 dollars in funding for the project this Spring, when residents of Prince Rupert and beyond joined together to help put the Mckay Street Project to the top of a vote getting competition hosted by BCAA.