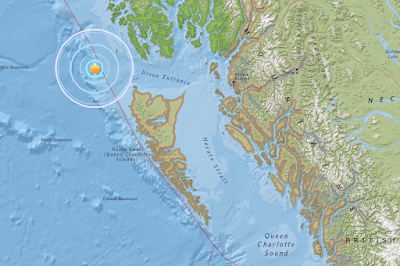 The plates running along the Northwest coast shifted a little on Wednesday evening as a 4.1 magnitude earthquake was recorded Northwest of Haida Gwaii, just south of the A/B line.

The temblor which struck at 7:44 PM was centred 248 kilometres west of Prince Rupert with a recorded depth of 23.1 kilometres.

While reports from Masset indicated that the quake was felt, No damage, or injuries appeared to have been reported following the seismic event.

No Tsunami warning was generated from Wednesday's event.

Notes on past seismic incidents in the region can be reviewed here.
Posted by . at 12:28 AM

Email ThisBlogThis!Share to TwitterShare to FacebookShare to Pinterest
Labels: 4.2 quake of Haida Gwaii