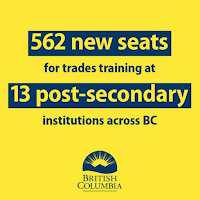 1.67 million dollars is on its way to British Columbia's post secondary institutions this fall, a cash injection to be directed towards 562 trades training positions at 13 different locations in the province, with Northwest Community College set to receive 65,000 dollars in additional money for regional intiatives.

As part of the funding program NWCC has been allocated 16 additional trade seats for their Northwest trades program.

During the course of the roll out of the new funding for post-secondary education institutions, Melanie Mark, the Minister of Advanced Education, Skills and Training observed how the government's investment today will bring strong results in the future.

“It's been inspiring for me to visit our public post-secondary institutions, and to meet and listen to the trades students that will be building our homes, roads, schools and businesses ...These students are future innovators. Our investment today in additional trades seats is an investment in the future of our province. Together, we are building a better B.C.”

The full announcement from the new NDP government can be reviewed here.

When it comes to spreading the funding around however, the NDP has put the majority of their focus on some of the largest institutions and largest communities in the province, with the rural institutions on the list, such as NWCC, for the most part averaging less than 70,000 for their trades programs.


While any additional funding for education in the region is always a welcome thing, with 16 new seats for the Northwest and an investment bump of but 65,000 dollars in jobs training, the delivery of provincial money for this area of BC, is somewhat muted when compared to other regions of the province.

When one reviews the full list of funding from this week, it appears that a significant portion of the trades training placements for BC's colleges and universities went to two institutions, BCIT in Vancouver and Camosun College in Victoria.

Combined those two campuses received 224 trades seats and over 450,000 dollars of the total funding

As well, a number of other institutions, mostly located in the larger urban centres gained over 100,000 dollars each for trades training for their communities. 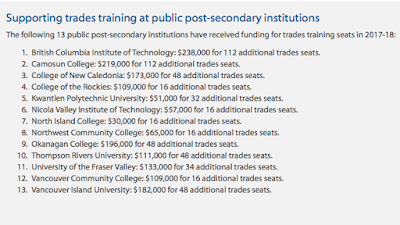 The somewhat out of balance funding for rural communities, compared to that allocated for the larger centres, should be a topic of conversation for North Coast MLA Jennifer Rice to bring to the attention of the rest of the NDP government caucus members in Victoria.

Providing for more resources for rural communities was a theme that Ms. Rice frequently had been advocate for in the past while in the opposition.

Now that she sits on the government side of the Legislature, the funding announcement from this week, would seem to be an opportunity that has been lost  when it comes to delivering on that particular promise from the years that are now in the NDP's rear view mirror.

You can review what trades training options are available through Northwest Community College from their website here.

Mote items related to post secondary education across the Northwest can be found here.

For further background on news out of the Legislature see our archive page here, as well, we feature a wider overview on politics through our portal D'Arcy McGee.
Posted by . at 9:51 AM