The significant number of eyesore properties found in the downtown area once again provided a topic for Prince Rupert City council on Monday night, as Councillor Barry Cunningham reminded council that he still isn't seeing much in the way of progress on his oft mentioned concerns over the state of the buildings throughout the downtown core.

Calling attention to the same list of problem properties that he has mentioned in the past, Councillor Cunningham once again urged his fellow council members to ensure that the city shows some teeth when dealing with un-cooperative property owners across the city.

Both Mr. Cunningham and to a lesser extent Councillor Wade Niesh, vented some of their frustration at the pace of action from the city so far when it comes to addressing those concerns

The nature of the conversation around the Council chamber on the night left Mayor Lee Brain to counsel patience to his fellow council members during the fairly impassioned discussion on the theme at Monday's council session.

The state of those derelict buildings has been a frequent issue for the two city councillors over the last few years,  with Mr. Cunningham having made a similar call for action by the city back in May offering up his observation on Monday that not much has happened since that point.

Such has been the state of disrepair for some of the downtown buildings that Tourism Prince Rupert took note of the ongoing condition in February, highlighting the impact that the visual impression may be having on the community's reputation with visitors

On Monday, Mr. Cunningham called attention to the many initiatives that the City has launched over the last few years, such as ReBuild Prince Rupert and Redesign Rupert, noting that despite the investment in those civic instruments, the blight of poorly maintained buildings remains something that continues to elude the ability of the city to take care of. 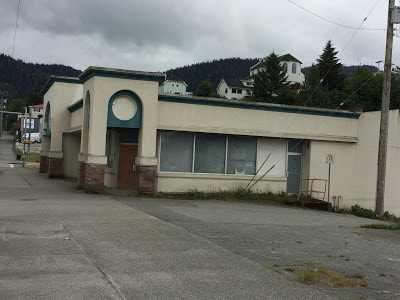 The Mayor's response to the issue was first one of agreement that many in the community are on the same page as Councillor Cunningham when it comes to the need to take action on the buildings in question.

However to counter some of Mr. Cunningham's notes on the pace of action by the city, Mayor Brain did offer up some thoughts on what progress the city has made to this point.

Among his observations he outlined how some of the downtown issues are being addressed through Councillor Blair Mirau's Small Business Advisory Committee, which according to the Mayor currently is looking to re-tool some of the policies and how the City interacts with the business community.

Unfortunately, Mr, Mirau was not in attendance at Monday's session, so there was no update available for Council as to the progress of that engagement, or when some of those themes might be was available for review.

"It's not just up to the city to punish people to fix their buildings, it's a community effort"  -- Mayor Lee Brain on the issue of the state of the downtown core in Prince Rupert

The Mayor did offer up some some signs of progress in the downtown,  pointing towards the city's recent road building and sidewalk construction efforts as an indication that they are addressing downtown infrastructure, adding that while things may not be happening as fast as people might like, the city should celebrate the success that they have achieved to this point.

Towards the mayor's notes on that progress to date, Mr. Cunningham had a short observation that while the city's work downtown is nice, the overall impression from residents of their downtown core is one that it is still not very appealing, or as he put it to council:

"Well, it's nice to have a beautiful road to drive on and nice  sidewalks to walk on, but when you're driving on that road, or walking on those sidewalks you're looking at a piece of crap beside it"

The councillor also noted that while some business owners are taking pride and making strides to make the area appealing, it's the ones that aren't that he is concerned about, adding that these issues have been ongoing over a number of years and that the city has to come to plate and say enough is enough and take action on the concerns.

Mr. Cunningham also expanded some of his concerns towards local residential property owners who are not taking much in the way of pride in the appearance of their properties.

He called attention to one home along eighth Avenue West, which is located on the approach to the golf course, observing as to how that is a location that he would like to see the city take some action on as it is a route frequently taken by visitors to the community.

He also observed that there are a number of other areas in the community where the city could also direct attention towards.

Councillor Niesh took up the torch on addressing the issues of the downtown calling attention to a pair of properties on Second Avenue damaged by fire earlier this year, asking as to what the status of the plans for those buildings might be.

Mr. Niesh also made note that similar incidents in Terrace are handled in a much more expedient fashion, with damaged buildings addressed much quicker than seems to be the case for Prince Rupert.

For his final notes on the theme Mayor Brain  reinforced his belief as to how things are being addressed and offered up his confidence that the issues can be taken care of over the next few years.

"These things take time, there's plans and processes in place, the actions are being taken and it's gonna to happen over time, but I am confident that over the next couple of years we will be able to really tackle some of these bigger problems. But we can control what we can control as a city right now, and our bylaws do say what they say and we need to work constructively with these business owners and these building owners too ... We are working constructively with them and  there are some building owners that aren't responding to things like that and I agree that there should be a process in place  for us to start the process of getting them to come forward, but I also believe that working together as a community on this huge issue that is just not about the city alone, is more of a process that we should be doing and that's what's happening "

A more expansive review of the full exchange among Council members from Monday is available from our Council Timeline Feature.

You can also review the flow of the discussion on theme from the City's Video archive, it starts at the 58 minute mark of the August 21st session.