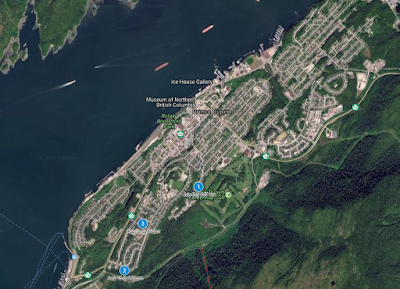 A number of  Facebook forums are once again featuring a number of accounts of a bear sighting on the city's west side, with a burst of tracking advirories being noted over a two day period of August 15 and 16.

As noted, these are not the first bear sighting of the year, earlier this summer a number of bear sightings in the same west side area resulted in the Conservation Service out of Terrace arriving in town in July with a bear trap, which the bear managed to avoid as the weeks moved along.

The recent sightings have made for some new entries on a local bear tracking website which was launched following the initial sightings of June, you can learn more about that online tracking feature here.

Further notes on the work of emergency service personnel in the Northwest can be found on our archive page here.
Posted by . at 8:51 AM