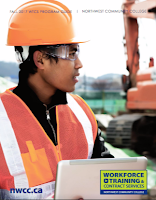 With the 2016-17 school year just but a few weeks away, Northwest Community college which serves communities with campus locations from Haida Gwaii to Smithers has just released their fall Workforce Training Contract Services catalogue, offering up a sample of some of the programs designed to train industry workers in a range of occupations.

NWCC has been adding on to their industrial course options for that sector of the educational program over the last few years, with the course offerings for the fall putting a focus on marine elements at the Prince Rupert campus.

Among those courses that provide marine instruction are:

The Prince Rupert campus also offers a few other of the courses from the 10 pages of listings from the fall catalogue.

Cashier Training
Date to be determined depending on interest


A larger volume of Workforce Training courses is offered at the Terrace campus, while NWCC also provides a number of courses that are delivered online via the Ed2Go course catalogue.

The full catalogue of course options as part of the Workforce Training Contract service program is available here.

Beyond the Workforce Training program, NWCC provides for a range of post secondary courses, both academic for University transfer, as well as a large core group of Trades opportunities at campus locations across the region.

For a larger overview of what NWCC has to offer from all of their programs see the NWCC website.

The Prince Rupert campus, like others that make up the NWCC system will also be making preparations following a pair of announcements by the Provincial government yesterday that could steer larger volumes of students to college campus locations.

Tuesday, the NDP government announced the elimination of tuition fees on Adult Basic Education and English Language Learning programs, a move that the government says could open the door for tens of thousands of British Columbians to upgrade their education and skills.

More notes related to post-secondary education can be reviewed on our archive page.