Some electrical work on the city's west side has been put out for tender, as the City of Prince Rupert seeks bids on a project to replace some electrical components in the Pillsbury/Park Avenue area.

The terms for bids related to the Pillsbury Lift Station were posted to the BC Bid website last week, with the City accepting bid packages on the project until the end of this month.

A site tour is being hosted by the City later today, with would be bidders invited to tour the Pillsbury Lift Station on the west side location at 2 PM today.

While not mandatory, it offers a chance for would be bidders to examine the site and review first hand the city's specifications for the work ahead.

Among the work that the project will require includes: 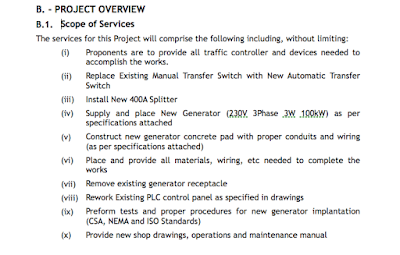 The deadline for submissions of bids is August 31st at 2 PM.

A full review of the City's 12 page project prospectus can be found from the BC Bid website.

More notes related to past City calls for tenders can be reviewed here.

Further background on City of Prince Rupert developments can be found here.
Posted by . at 8:41 AM