The North Coast fishery once an economic engine for Prince Rupert in the summer months and beyond, continues to show its strains and struggles this year with low stock returns and changing corporate planning providing for a double hit on the local industry and with it setting the scene for what will be a challenging fall and winter months for those that work at local plants.

Anyone who has walked or driven past the giant Canadian Fish plant at the foot of George Hills Way and Dry dock road can't help but notice the empty parking lot and significantly reduced level of trucks transiting to and from the plant this summer.

With few hours of employment for those workers that are even called in to work this year, the prospect of EI qualification could be a significant issue for the community as what little employment available begins to wind down by late September, something which could see local social services once again stretched to the breaking point.

A CBC British Columbia News story from yesterday offers up the testimony from local workers as to just how dire this year has been so far, along with with their fears for the future of the industry on the North Coast and what that may mean for the community as local workers no longer can find work here.

Such has been the news out of the fish plants this summer that UFAWU-Unifor the labour organization that represents the workers in Prince Rupert has already telegraphed its plans to seek out some assistance from North Coast MLA Jennifer Rice, a post on their Facebook page of a week ago indicating their plans to discuss fishery issues with her once the summer wildfire season has come to an end. 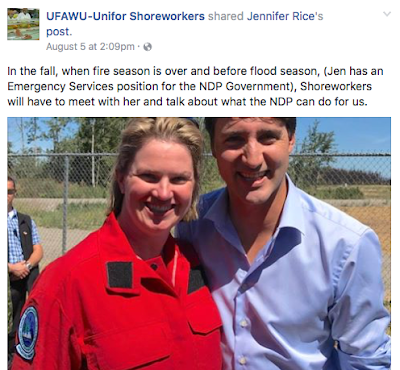 UFAWU's Northern rep, Joy Thorkelson also offered up some commentary on the impact of DFO decisions on the commercial sector this year, as well as to offer up some background related to the themes of the Northwest recreational and sport fishery, as well as the First Nations fishery, providing her review through a letter to the editor for the Terrace Standard on August 6th.

This years salmon fishery has once again put the focus on the declining fish stock returns, as well as reinforced the impact that has been felt in the community from the decision by Canadian Fish to remove their canning lines at the George Hills Plant, a move which has meant a large number of former workers to try and seek out other employment options as the fishing industry continues its retrenchment.

More notes related to fishing in the Northwest can be found on our archive page.
Posted by . at 10:19 AM

Email ThisBlogThis!Share to TwitterShare to FacebookShare to Pinterest
Labels: Fishing issues on the North Coast summer 2017