As Finance Minister Bill Morneau contemplates how best to introduce some proposed tax changes when it comes to Canadian corporations, business owners across the country are working together to push back on some of elements of concern to them when it comes to the Liberal Government plans.

The alarm bells started going off for Canadian business leaders in mid July when the Finance Minister delivered this statement on how to improve the Canadian Tax system, the key take away from his presentation these observations:

"When you have an economy that works for the middle class, you have a country that works for everyone. That's the spirit in which we are asking Canadians for input into how to close loopholes and address tax planning strategies that give unfair tax advantages. Many of the richest Canadians are unfairly exploiting the tax rules designed to help businesses thrive.

We know that businesses, including small businesses, help grow the Canadian economy. These tax advantages are in place to help these businesses reinvest and grow, find new customers, buy new equipment and hire more people. We want to make sure those rules are used to do just that, and not to give unfair tax advantages to certain – often high-income – individuals."

However, what business leaders heard, wasn't so much a call for tax fairness, as perhaps a call for a tax grab by the Federal government.

Among some of the concerns of note for business owners are how the government plans to scrutinize compensation and apply a higher tax rate on any income considered unreasonable.

Also on their checklist, the federal government's planned approach towards profit investment is raising an alarm for business owners, as are new rules when it comes to capital gains exemptions business owners pass their business on to their children.

In response to the government's plans, 35 business groups from across the country have come together through the Canadian Chamber of Commerce to form the Coalition for Small Business Tax Fairness.

As part of their campaign yesterday they delivered this letter to the Finance Minister, offering up two recommendations for the Federal Government.

The first asking that the Finance Minister take his current proposal off the table, the second seeking meaningful consultation with the business community to address the shortcomings in tax policy without unfairly targeting independent business.

Such has been the backlash to the proposed legislation, that it will be the focus at an upcoming cabinet retreat planned for next week in Kelowna.

A snapshot of some of that backlash can be reviewed below:

Locally the Prince Rupert and District Chamber of Commerce sent out an alert to its membership earlier this week, making note of the Federal plans and outlining how they hope to see local business owners in the region address their concerns to the Federal Government, as well as local NDP MP Nathan Cullen. 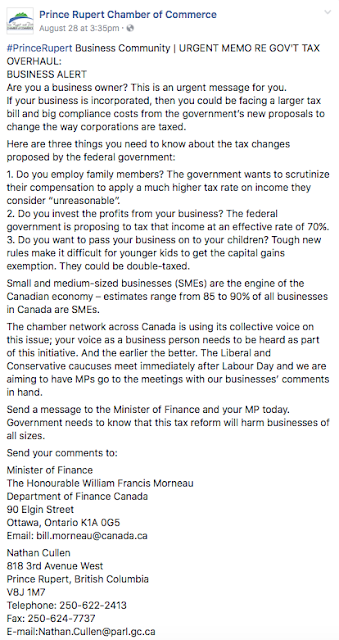 The Chamber's letter writing campaign is designed to have local comments received by the politicians in Ottawa before they head back to work following the Labour Day holiday.

You can learn more about the Canadian Chamber of Commerce initiative here.

Those with an interest in the full text of the proposed regulation can sit down with their accountants, or financial advisers and go over the finer points here

Further background on the brewing controversy in Ottawa can be reviewed over at our political portal D'Arcy McGee, where we keep an eye on the nation's capital with our Ottawa Observations archive.

For more items related to the commercial sector on the North Coast see our archive page here.
Posted by . at 2:21 PM

Email ThisBlogThis!Share to TwitterShare to FacebookShare to Pinterest
Labels: Business push back on Fed Tax plans