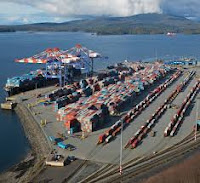 Much has already been said this week about the impact of the expansion to the Fairview Container Terminal, from the volume of jobs that it provides to the community, to the increase in economic growth that it has generated far beyond the dock at Prince Rupert harbour.

One area that the growing gateway to the world is providing a significant increase for is the awareness and use by shippers of the massive transportation network that CN Rail has created to service the port.

For Canadian National Railway the added capacity at Fairview Terminal means a significant increase for their business and a larger imprint for the national rail road when it comes to transporting goods to and from terminal locations from as far south as New Orleans, to locations across Canada.

CN was a major participant in Tuesday's Grand Opening of the Fairview expansion project and to stress how important the port is to the railways operations CN's President and CEO Luc Jobin called back to the history of the railway in Prince Rupert and outlined how the success created by the Port of Prince Rupert  and DP World is model for how to develop a trade corridor.

"The city of Prince Rupert was built for Canadian trade and the container terminal unlocked so much of the port's untapped potential.

As one of the fastest growing ports in North America, the Port of Prince Rupert holds a premier place on the global trade map.

The last decade of supply chain collaboration between the port, terminal operators, CN and other partners has become the model for how to establish and grow a trade corridor."

Congratulations to the Port of Prince Rupert and DP World, We look forward to continuing our successful partnership as the port evolves and we facilitate the growth of our customers' import and export markets."

The full statement celebrating the opening of the Fairview expansion and ten years of container shipments out of Prince Rupert can be reviewed here.

From those early days of ten years ago, CN's operations have grown impressively at Fairview, expanding its service from a single train a week, to a schedule that today brings more than 15 trains a week into the Fairview container yard.

Such has been the growth of that traffic that Prince Rupert now accounts for 20 percent of CN's intermodal business.

CN also serves the other port facilities at the Port of Prince Rupert with trains arriving and departing from Prince Rupert Grain and Ridley Terminals.

This fall will see increased grain traffic arriving at the south end of Ridley Island at the newly opened Ray-Mont terminal facility which is preparing to receive shipments from the prairie provinces.

Looking a bit to the future, the railway will also be a key element of the now under construction Alta-Gas propane shipment facility, with CN set to deliver propane for export once that terminal complex goes into operation.

More notes related to CN operations across Northwest BC can be reviewed here.
Posted by . at 9:34 AM