Fairview Terminal, changing the face of the Prince Rupert Waterfront 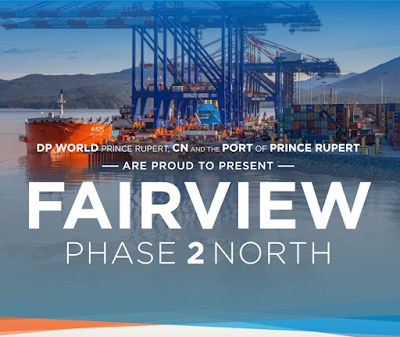 It's celebration day for the workers, managers and owners of DP World's Fairview Terminal as the expanding footprint of the container terminal is officially opened today, bringing with it an impressive line up of officials arriving in the city to herald the completion of the highly anticipated industrial project on the Prince rupert waterfront.

Among some of the officials in town for today's event will be Sultan Ahmed Bin Sulayem, Group Chairman and CEO of DP Word, Tiemen Meester, the Senior VP and Managing Director for DP's Americas Region, along with Jean-Jacques Ruest, Chief Marketing Officer and Executive VP of Canadian National Railway, in addition to the corporate leaders in town, representatives of the Federal and provincial government will also participate in todays event.

Don Krusel, the President and CEO of the Port of Prince Rupert will be part of the day's official opening, and should have an interesting perspective on the achievement of the expansion and how far the development of the container shipping industry has come for the North Coast in ten short years.

Also participating in today's even will be Harold Leighton, Chief of the Metlakatla Governing Council, John Helin, Mayor of the Lax Kw'alaams Band Council and Glen Edwards, President of ILWU Local 505.

The Grand Opening comes following a two year expansion project first announced by Maher Terminals in March of 2015 and brought to completion by DP World following their purchase of the terminal complex.

With the opening of the Northern segment of the expanded terminal facility the Port of Prince Rupert now becomes the second largest container handling facility in Canada and a gateway to Asia that is now ready to accommodate the largest container vessels in the world.

With its completion, Fairview Terminal has nearly doubled it's container handling capacity from 850,000 containers per year to an anticipated volume of 1.3 million in the future.

As well, new opportunities for shipment out of Prince Rupert have been created by adding a number of expended elements such as refrigeration units and expanded container parking to the growing list of options for shippers using the North Coast.

Among some of the work that took place over the course of two years towards today's Grand opening, the expansion project featured the following:

Dredging and construction of a 155m long and 40m wide piled concrete wharf.

Reclamation of 3ha of land at the north end of the terminal.

Modification of the Small Craft Harbours breakwater and float.

Widening 250m of wharf from the existing northern caisson structure by 20m.

Addition of 36m to the southern apron structure.

Construction of mooring dolphin and walkway.

Excavation/construction of a container park east of the terminal.

Upgrade of rail capacity and installation of additional rails and cranes on the new wharf extension.


The official ceremonies and ribbon cutting event gets underway today at 11 AM with a number of remarks from officials in attendance, the community open house at the facility will take place from 12:30 to 4:30.

Those taking in the day at Fairview will get a chance to have a close up look at the container facility, with interactive activities planned for children to go along with the Community BBQ and musical entertainment that will make for the day's events.

With a large crowd anticipated for the site today,  and limited space available on site, parking could fill up rather quickly at Fairview and with that in mind DP World has organized a shuttle bus service for the day, the route will run between Jim Ciccone Civic Centre and the DP World Terminal from 12:15 to 4:30 today.

You can fine more information related to today's Grand opening from this website page created to celebrate the event.

Some background on the scope of the expansion project can be reviewed here.

For further notes related to the Fairview Container facility see our archive page here, while items of interest related to the Port of Prince Rupert can be found here.