The North Coast running scene will have to make do without one high profile race this year, as organizers of the North Pacific Cannery Road Race have announced the cancellation of the event for 2017.

In a post to the Rupert Runners website from last week, the Executive Board of the organization which oversees the local race season announced that the Cannery Road Race would not go forward this year owing to personal and medical reasons with two directors who had to step down from their duties. 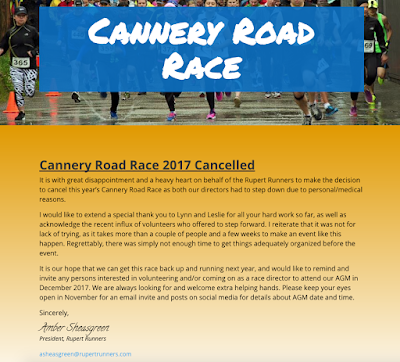 The race usually marks the end of the running season in the region, offering up a family friendly event that travels along the scenic Skeena Drive roadway leading to the North Pacific Cannery Historical site.

Of the four major races that are put on each year, the Cannery Road Race, coming as it does at the end of summer has on occasion been the one race that organizers have had difficulties in finding volunteers to help with.

It has been cancelled a few times in the recent past, though not without an impressive effort from organizers to get the race to the start line. Most recently the event had returned to the schedule in 2016 after having been cancelled in 2015 owing to a lack of volunteers to put the race on.

Towards that goal, Rupert Runners hope to get the September race back on track for next year and those with an interest in running can offer up their assistance at the upcoming Annual General Meeting for the Club this December.

The next opportunity for local runners to take to the streets comes up on September 17th with the Annual Terry Fox Run around the city. That event starts at the Northern Savings Credit Union at 1 PM, organizers have a 3k, 4k or 10k route in place for the fundraising run.

More background on running in the Northwest can be found on our archive page.