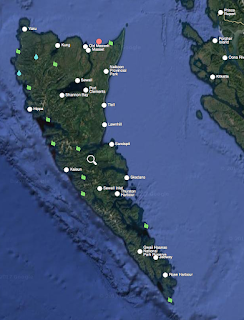 A case dating back two years recently came to a conclusion in the Prince Rupert courtroom of Judge Herman Seidemann in April, with the skipper of the commercial crabbing vessel Vitamin Sea VI pleading guilty to violations of the Fisheries Act.

Van Te Le, entered his plea of guilty on April 10th, accepting his responsibility in the harvest of Dungeness Crab in a closed area between June 21 and 30th of 2015.

An information release from the Department of Fisheries and Oceans outlined that the charges came out of an investigation into the setting of more than 49 crab traps inside the Soft-Shell Management Area 10 at McIntyre Bay, located north of Masset on Haida Gwaii.

The investigation was launched following a routine audit of the vessel's logbook and electronic monitoring data had revealed possible fishing violations.

As part of the sentence, Judge Seidemann ordered that Mr. Le to pay a fine of 15,000 dollars, with 14,000 dollars of the total to be directed towards preservation and conservation projects around Haida Gwaii and Hecate Strait.

In their update for the public, DFO reinforced the seriousness of such offences along the North Coast and their ongoing efforts to continue to enforce fishery regulations.

They also outlined the impact that the incident could have had no crab stock in the McIntyre Bay area:

Fishing during the McIntyre Bay soft-shell closure could have detrimental impacts on its crab stocks, the ability of First Nations to meet their Food, Social and Ceremonial needs, the livelihood of commercial licence holders designated to fish in the Area, and the success of recreational fishermen in the area.

For the past several years commercial catches in McIntyre Bay have been below the historic average so protecting its crab populations, particularly during their vulnerable soft-shell time, is increasingly important for long-term conservation and viable fishery reasons. Moreover, this unaccounted for pressure, particularly during its soft-shell closure, contributes to continued low crab abundances and threatens fishing viability for this area.

More background on the April 2015 incident can be reviewed here, while a larger overview of the Crab Fishery in the Pacific Region is available on the DFO website.

For more notes related to the work of Emergency Service and law enforcement officials on the North Coast see our archive page here.
Posted by . at 8:56 AM