The results of the Board of Directors election at Northern Savings Credit Union saw little in the way of change for this year, with the endorsement of the voting public for incumbents Mimmo Ciccone, Rod Cox and Trent Moraes, the trio were elected to continue on with their posts from the three director positions that were available for this year.

In 2018, there will be four Director seats up for election, one for District 6 on Haida Gwaii and three at large seats, more notes on the electoral process will be outlined in the months ahead. 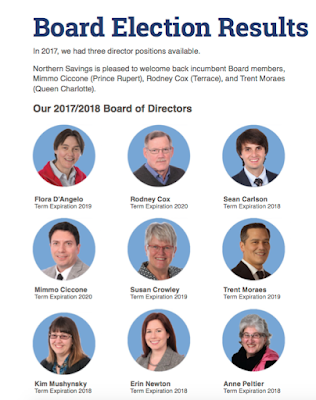 As well, the Credit Union is celebrating the success of Ms. Vida Carson, the Financial Adivsor gained recognition for her achievement out of the Terrace branch , her work was noted as placing her as 1 of 25 top advisors out of over 600 Qtrade advisors in 2016.

More notes on the latest developments for the Credit Union can be found here.

Northern Savings has also outlined some changes for the Haida Gwaii service, adjusting the operations to their Port Clements initiative which was launched in October of 2016 as a pilot project, that option was available until late June, residents of the region are advised that the Masset and Queen Charlotte City branch is offering financial services for those that were using the Port Clements option, as well Northern Savings notes that online banking services are also available in the region.

For more background on the Commercial sector of the Northwest, see our archive page here.