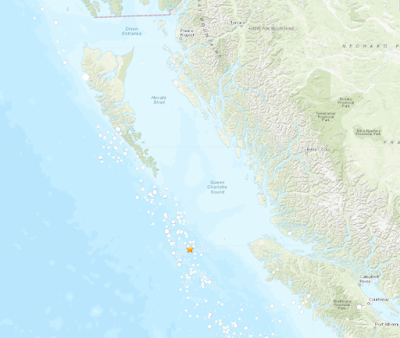 Another moderate earth movement has been recorded in an area between the southern tip of Haida Gwaii and Vancouver Island that has seen a string of similar sized quakes in recent months.

A 4.1 magnitude earthquake was noted by the USGS monitoring service at 2:53 this afternoon, rattling the fault line some 187 Kilometres to the west of Port Hardy. The temblor had a depth of 10 kilometres.

No reports from Port Hardy or other smaller communities at the North end of Vancouver island have been received so fart to indicate if the event was even noticed.

You can review our list of recent seismic activity on the British Columbia and Alaskan fault line from our archive page here.

To return to the most recent blog posting of the day, click here.
Posted by . at 3:44 PM