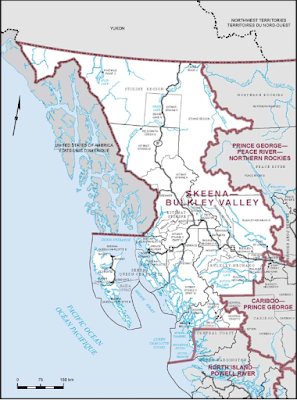 The votes have been cast and counted, though the final totals of the results not released as of yet by constituency officials for the Conservative Skeena-Bukley Valley riding Association.

However,  by way of the social media stream of candidate Claire Rattée we now know who will carry the Conservative flag into the 2019 Federal election.

According to the short post to her Facebook page on Sunday, Ms. Rattée claimed the contest, topping another Kitimat resident Jody Craven.

The results have yet to be officially confirmed by the Skeena-Bulkley Vally Conservatives through a public Facebook page for the constituency or the website for the party.

The latter a portal that is somewhat devoid of any actual mention of the riding, its nomination candidates, or the issues of the Northwest.

Ms. Ratée who is the co- owner of small business in Kitimat (Divine Ink) was a District Councillor from 2014-2018, she ran a nomination campaign based on fostering a more positive environment for small business and the entrepreneurs who start them up.

She is hoping to claim the riding in the Federal election for the Conservatives in order to fight to improve the economic outlook for the region and to promote environmentally safe projects for the northwest. 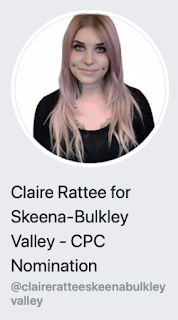 You can review the full range of her presentation in quest of the Conservative nomination here.

More background on her political themes can be found from her  website.

Voting took place through the weekend in Terrace, Kitimat, Smithers and Prince Rupert, the local vote taking place on Saturday morning with the balloting taking place at the Crest hotel.

The ballots were then taken to Smithers where the count to declare the winner took place.

The Conservative nomination did not come without some controversy, with the candidacy for three others: Gerald Caron, Mary Ann Freeman and Manon Joice declared invalid.

Conservative officials have yet to explain why the three would be candidates were declined the opportunity to contest the nomination.

The riding is currently held by long time Member of Parliament Nathan Cullen, the NDP member from Smithers, Mr. Cullen has not yet indicated if he will be contesting the riding for another term.

The high profile NDP member and former leadership contender has been a Member of Parliament  for Skeena Bulkley Valley since 2004.

You can review notes on the federal scene and the Skeena-Bulkley Valley constituency from our House of Commons archive page here.

To view the most recent blog posting of the day, click here.
Posted by . at 10:45 AM

Email ThisBlogThis!Share to TwitterShare to FacebookShare to Pinterest
Labels: Claire Ratée to be Conservative candidate in Federal election