Both of the representatives of the Northwest at the BC Legislature had a chance to weigh in on the recent government funding announcement of a 100 million  dollar, one time infusion of grant money for infrastructure needs across the  region.

That funding which was announced from Terrace on February 16th, when Premier John Horgan and a number of Northwest Mayors gathered at Coast Mountain College to outline the nature  of the funding for the region, the money coming in response to the efforts of the member communities of the Northwest BC Resource Benefits Association who launched their campaign for financial assistance four years ago. 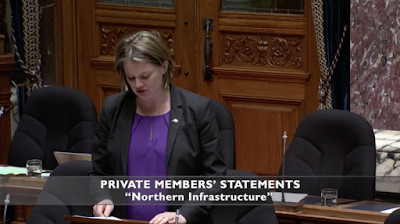 For Ms. Rice the delivery of the one time funding was a case of the NDP reversing what she described as a "legacy of neglect", noting how the new 100 million dollar northern capital and planning grant will benefit from resource development and make the most of new opportunities.

She also called on some of her time in the Northwest and made note of many of the challenges that municipalities face across the region.

As a northern resident for over a decade and a former city councillor before becoming an MLA, I know that critical infrastructure investments are needed in my community. We've had issues with potable water, accessing our airports, bridges in disrepair, crumbling roads and a lack of sewer treatment, to name a few of the challenges. We've also had worldwide attention on our port, and many industry proponents have expressed interest in our natural assets, like our proximity to Asian markets and a naturally deep harbour.

The challenge is that we need help getting ready for these industries. We simply have not had the population and, thus, the tax base to properly maintain our infrastructure. If the northwest is to support new import and export industries and an influx of workers, we need to plan for the future and provide basic services and infrastructure.

I'm proud to be a part of a government that is listening to small, northern local communities and responding with $100 million of support. For several years, we've been hearing from northern communities concerned that the state and capacity of their current infrastructure may not be sufficient to meet their future growth needs, especially with recent investment plans such as LNG Canada in Kitimat. 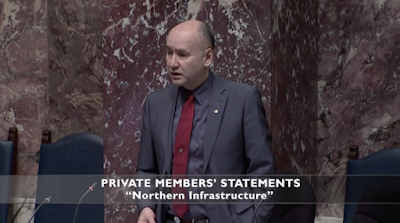 The mention of the Kitimat project appeared to catch the ear of Ellis Ross the Skeena MLA who immediately followed the North Coast MLA in the speaking order.

Mr Ross calling on his years as the elected chief of the Haisla Nation government offered up a reminder of some of the work of the previous Liberal government on the infrastructure issues and made note of one significant absence from the NDP's announcement of February 16.

The term "infrastructure" first came to our council about ten years ago when I served as chief of council. That was in terms of the hospital as well as highway development. We did flex our Aboriginal rights and title interests, but in the interest of the region, we decided not to flex it any further because we could see that infrastructure benefits everybody, regardless. So we did not pursue economic interests. We did not pursue politics, which is where these types of announcements usually devolve to.

To demonstrate the province's willingness to provide the necessary supporting infrastructure to attract LNG investors, the previous government embarked on a program to identify areas of potential development. The Pacific Northwest was identified as a region of major economic development for the next five to 112 years — that is, if we're successful in unlocking British Columbia's potential to become a major player in the energy sector by utilizing our vast natural gas reserves.

Under the previous government, it commenced years ago with highway improvements — naturally, with the understanding that much more would be needed. Our band council agreed and supported and did not oppose any proposals regarding infrastructure. LNG Canada announced its final investment decision last October, and this process has now been stepped up even further, which I applaud.

The duelling viewpoints on the nature of the funding also found the two MLA's not surprisingly on slightly different tracks, with the North Coast member receiving an admonishment at one point from the Speaker to keep things from becoming too partisan when it came to the talking points.

Ms. Rice delivered the final themes of her contribution to the debate by observing how the funding was the fulfillment of a campaign promise and how the NDP government's approach differs from that of the previous Liberal government.

The Northwest B.C. Resource Benefits Alliance, formed in 2014, is an association of 21 local governments across the northwest from Masset to Vanderhoof. The RBA was created to negotiate a new funding agreement with the province to ensure that the northwest benefits from the tremendous level of economic activity in the region.

The B.C. NDP are fulfilling our campaign promise of working with the Northwest B.C. Resource Benefits Alliance to build a sustainable economy and support people in the northwest. The B.C. Liberals refused to support the RBA, instead opting to say to the people of the northwest: "You will only get support once an LNG terminal is built and starts making money."

For the final themes of Mr. Ross' presentation to the Chamber, the Skeena MLA traced the evolution of the 100 million dollar grant and noted that from his view, much of the foundation for the grant had come from the work of the previous government.

As noted earlier, the $100 million announcement was not made as a part of Budget 2019. It is part of a $375 million package of funding that is being applied for before the end of the current fiscal year. It is a kind of dividend that has only come about after many years of fiscal discipline, balanced budgets and prudence with the public purse.

It was money previously unavailable because we were still carrying an accumulation of debt from previous operating deficits known as supplementary estimates. The current Minister of Finance has acknowledged that none of this would be possible without the work of her predecessor, the member for Abbotsford West. This has allowed the current Finance Minister the freedom to use end-of-year surpluses to the benefit of the province as a whole.

While this funding will accommodate 22 municipalities and four regional districts along the LNG corridor, I should remind the hon. member that there are many more local governments in the north who also have needs and deserve the benefit.

The transcript of the remarks can be found from Hansard record at the 10:20 mark of the review.

You can also review the full 10 minute or so exchange between the two MLA"s from the Legislature Video Archive, it's available from the Chamber video for that morning starting at the 10:20 AM mark of the AM session.

Email ThisBlogThis!Share to TwitterShare to FacebookShare to Pinterest
Labels: MLA's Rice and Ross on recent funding announcement for NW communities