It's a few years off in the distance, but if all goes according to the timeline for development, the Port of Prince Rupert will be seeing more shipments of Alberta's resources by 2022, with the Alberta government yesterday throwing its support behind a methanol production facility in Northwestern Alberta.

Alberta Premier Rachel Notley was in Grande Prairie on Wednesday, taking part in the announcement of the new multi billion dollar petro-chemical plant in the Northern Alberta city that will have some  spin off impact on Prince Rupert.

As part of the presentation, Calgary based, Nauticol further outlined its plans for a methanol manufacturing plant, a massive footprint in the Alberta city that will provide for over 200 jobs in that region of the province and create more rail traffic for CN Rail which as a map provided by Nauticol indicates will transport the finished product by rail car to a port facility in Prince Rupert. 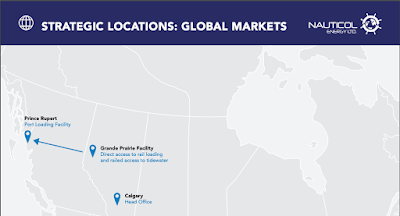 Methanol which is produced from natural gas is used in the production of such things as paints, plastics and other materials.

Notes from the Alberta government on the project can be reviewed here.

The full presentation from yesterdays announcement can be reviewed below, as Premier Notley outlines the ongoing commitment to diversifying Alberta's resource sector and Nautical President Mark Tonner explains how the project will come together.


There is little known yet about the Prince Rupert terminal plans as of yet, the timeline for the project would see construction of the Alberta production facility get underway in 2020, with the operation of the plant and shipments to Global markets planned for 2022.

The most likely destination for a terminal facility in Prince Rupert would be through a terminal project proposed by Vopak the global shipping giant from Holland.

Should that terminal receive its permits and make its way to the finish line, the shipment of methanol would make for one of a range of products to be shipped out of Prince Rupert that Vopak identified last year when they outlined their plans for their shipment terminal.

We haven't heard much about the progress of that terminal since Vopak hosted a pair of open Houses back in September or 2018.

In July of last year, Vopak identified a site on Ridley Island as the proposed home for its liquid bulk terminal, on land to be leased from the Port of Prince Rupert.

The Environmental process for the Vopak proposal is currently underway, with the most recent update listed on the British Columbia Environmental Assessment Office website indicating that the a procedural order had been issued as of November 2nd of last year.

For more notes on the Vopak plans see our archive page here, for wider overview of news from the Port of Prince Rupert see our Port Archive here.

To view the most recent blog posting of the day, click here.
Posted by . at 10:52 AM

Email ThisBlogThis!Share to TwitterShare to FacebookShare to Pinterest
Labels: methanol shipments could be ahead for proposed Port of Prince Rupert facility