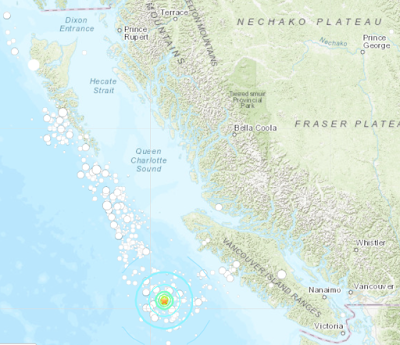 It has been a busy few hours for earthquake watching, with a 5.4 magnitude quake recorded off the coast of Tofino this morning at 4:33 AM, the offshore temblor was centred 220 kilometres off the West Coast of Vancouver Island.

The seismic event which had been originally set at 6.2 magnitude, was downgraded following further study, it had a depth of 10 kilometres 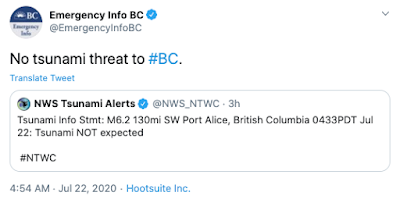 No damage was recorded and no Tsunami warning was generated by the quake, which followed a massive quake recorded in Alaska six hours previous.

For more notes related to seismic activity on the British Columbia coast see our archive page here.
Posted by . at 8:20 AM

Email ThisBlogThis!Share to TwitterShare to FacebookShare to Pinterest
Labels: 5.4 quake off of Vancouver Island