Ongoing concerns of uncivil behaviour in the downtown area brought a delegation of members of the Prince Rupert Legion to City Council on Monday night, with three from their leadership group making a presentation to Council, asking that the city take measures to address the issue.

The Council members heard from Tobbi Gjelsvic and Bernie Alexander who spoke for the representatives from the Legion,  asking for City Council to investigate ongoing issues of drunkenness and other anti social behaviour taking place throughout the downtown core and in their case in close proximity to the Prince Rupert branch of the Legion on Third Avenue West.

The delegation recounted a number of concerns beyond the ongoing issue of public drinking in the alleys near their Third Avenue location, making note of defecation in the alleys and the fears some of their members have while in the neighbourhood.

"We've had all kinds of visitors in the alley, to the point now where it's tough to police. I use the word police because that's what we need is we need something to deter these people from, I don't know what you wan to call it.  It creates another problem for our members and they're not all spring chickens, they've served their time a lot of them. So we were looking to see what could be done to get away from this, it's unacceptable" -- Members of the Legion raising their concerns about issues in the area of the Prince Rupert branch

Mayor Lee Brain put much of the focus for the conversation on the homeless situation in the city, observing as to how the City is working with the province and BC Housing on issues for the homeless and how they were trying to do all they can.

He observed for the Legion members as to the work ahead for the homeless with BC Housing and the province set to renovate Raffles at Five Corners which he says will be a big remedy for the community.

He also noted that there are outdoor washroom facilities for the homeless located behind the temporary facility at Fishermans' Hall, the city's homeless shelter was relocated to that location in April.

However to highlight their concerns, the delegation noted that they weren't singling out the homeless, observing that many of the problems they had listed are separate from homeless issues, with many people using the back alley as a hangout, lighting fires, consuming open alcohol and taking drugs.

The closing themes of their presentation noted that they were referring to illegal activities taking place near the Legion, with the Legion representatives observing that their membership should not have to take actions, or feel uncomfortable when trying to visit their branch.

"All we want is for the RCMP to patrol the area a little bit more to deter this, it's not just homeless that are drinking behind there"


Councillor Niesh would follow up on their concerns later in the evening, using his time during the Council members reports period with Mr. Niesh providing for his own commentary of anti-social behaviour that he has witnessed or heard about when it comes to people milling around town, drinking, defecating and recounting stories of having heard of people having sex in public at one downtown location during the day.

The Councillor expressed his own frustrations at the situation and noted that if he had done some of the incidents he had heard of he would be put in jail and charged, he added that COVID cannot be used as an excuse and how its more than just an issue of homeless people but more one of people just hanging around town.

The second term Council member adding that the law should be applied to all equally and how he is disgusted from what he has seen and heard around town and how it is an issue that needs to be dealt with, adding that Council should speak with the RCMP.

"I think that we do need to send a letter or not so much send a letter but a conversation with the RCMP about this, because I can tell you that if I were downtown having sex on a stairway or drinking I would probably be thrown in jail and I probably would be charged.

I don't think that COVID is an excuse to let people take over the community, we've all had homeless people over the years that have been around the town and you know for the most part we recognize those people, but lately this seems to be more than a homeless problem, this is a problem of just people in general, not homeless people, just people hanging about downtown"

Mr. Niesh however, was the only one to address the topic on the night, with no other council members speaking to the concerns that had been relayed from the Legion members.

While the issues of drunk behaviour and other non social activity is clearly a matter for the RCMP, concerns over sanitary issues is a topic that has come up at Council before.

As we noted in early July, there does not appear to have been any progress made to a project that Councillor Cunningham raised a few months ago, one that would have seen port-a-potties and sanitary hand washing stations placed in areas of the downtown.

Mr. Cunningham did not make any mention of his previous interest on the topic on Monday, and no update has been provided to Council on the progress for that initiative since the topic first came up.

At the moment, the only public washroom that is available in the downtown area, is the Mariner's Park facility which reopened to the public earlier this month, it now includes a hand washing sanitation station. 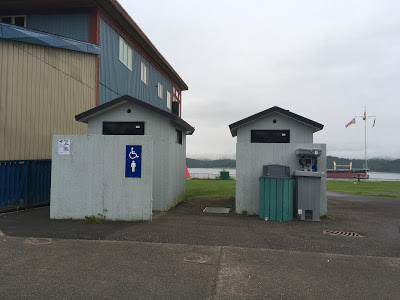 You can review the full discussion in two segments from the Monday's Council Session video, the first from the Legion presentation at the very opening of the session; the second at the fifty four minute mark, when Councillor Niesh provides for his own concerns.

A wider overview of Council themes is available from our Council Discussion archive.

Email ThisBlogThis!Share to TwitterShare to FacebookShare to Pinterest
Labels: Concerns over downtown behaviour and issues