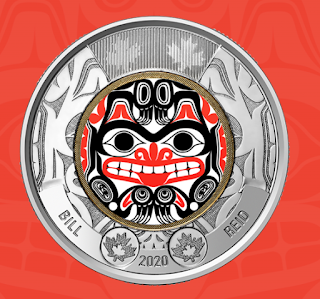 A chance to get a close up look at the work acclaimed Haida Gwaii artist Bill Reid could be as close as the change in your pocket or purse, with the Royal Canadian Mint announcing the release of the Bill Reid Commemorative Circulation coins.

The visionary Haida artist Iljuwas captured the spirit and traditions of the Haida through his celebrated career sharing the focus on the Islands and its people with the world for decades.

Born to a Haida mother and an American Father, Mr. Reid, who passed away in 1998 has been considered one of the nation's most respected contemporary artists, carvers and sculptors and championed the Haida through his work and presentations and is considered one of the trailblazers for Northwestern Coastal Art.

As the Bill Reid Gallery explains it, his work infused Haida traditions with his own modernist aesthetic to create both exquisitely small as well as monumental work that captured the public's imagination, and introduced a timeless vocabulary to the modern world

The character chosen for the commemorative circulation coin is the Grizzly Bear, Xuu.ajii, a favourite choice of the artist, it has been featured in jewelry designs and sculpture. The character has played a significant role in ancient Haida narratives and storytelling.


The two dollar coin which commemorates what would have been his 100th birthday, two versions of the toonie will be released by the Mint for circulation.

One with the striking red and black colourings, the other the more traditional toonie in silver and gold, they are just two of a number of Royal Canadian Mint items to pay tribute to the artist. 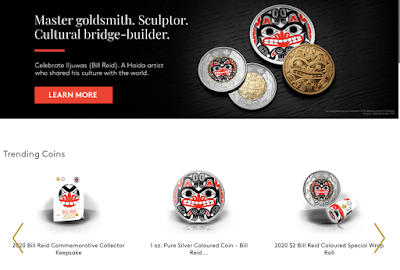 You can learn more about the Mint's celebration here.

For a wider exploration of his life and work of Mr. Reid, SFU hosts a page as host of the Bill Reid Gallery of Northwest Coast Art.

More items of interest related to Haida Gwaii can be found here.
Posted by . at 10:29 AM