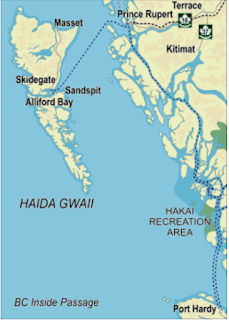 The Provincial government has announced today that travel to Haida Gwaii is now restricted to only residents of the island, the move announced by Mike Farnworth, Minister of Public Safety and Solicitor General was released shorty after 4PM and comes as part of the provincial measures to limit the spread of COVID-19 on the Islands.

“The Province, Northern Health and the First Nations Health Authority are working closely with the Haida Nation and local governments on Haida Gwaii to respond to this COVID-19 outbreak. Our foremost concern is the health and safety of all residents of Haida Gwaii, and we’re working together to limit further spread of COVID-19.” -- Mike Farnworth, Minister of Public Safety and Solicitor General

While the order does restrict non-residential travel to Haida Gwaii, the measures also include provisions to maintain essential goods and services for residents and come in support of the Haida Nation and the Province's COVID-19 response.

There are currently 20 cases of COVID reported on Haida Gwaii, all of them a community outbreak that came from residents who had travelled and returned to the Islands, or had contact with a resident who had travelled off island.

Today's announcement notes that the decision to restrict non-resident travel to Haida Gwaii has been made in a government-to-government collaboration with Council of the Haida Nation, Skidegate Band Council, Old Massett Village Council and local governments, in consultation with the provincial health officer.

The Province has also advised that it will deploy staff to support communities on the mainland and on Haida Gwaii to implement the travel restriction.

Full details on the provincial restrictions can be reviewed here.

The Council of the Haida Nation welcomed today's announcement, observing how it supports their current COVID response.

“This global health pandemic is a test of reconciliation with the province. It’s critical that we come together at this time of crisis. BC’s order is an important step towards a renewed partnership in emergency management. The province’s work to enact an order that aligns with the Haida Nation’s State of Emergency is a respectful act and recognition of Haida jurisdiction and our responsibility as governments to work together to protect all communities and residents of Haida Gwaii from the threat of COVID-19.” — Gaagwiis Jason Alsop, President of the Haida Nation 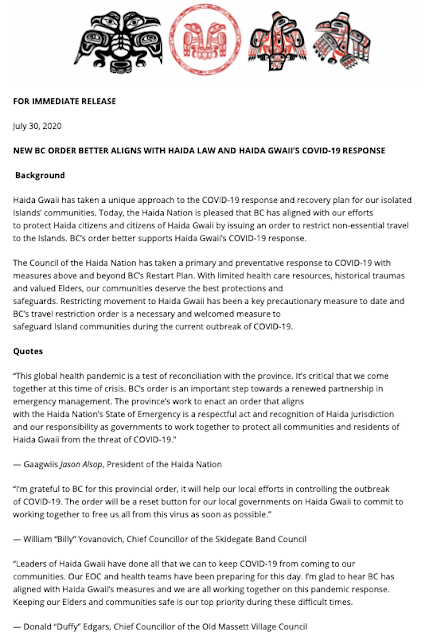 More background on the Council of Haida Nation statement can be reviewed here.

More background on the province's COVID measures can be found from our archive page here.

A wider overview of past items from Haida Gwaii is available here.

Update: On Friday it was announced that members of the BC Conservation Officer Service would be stationed at the Prince Rupert Ferry Terminal to enforce the provincial order restricting non-resident travel to Haida Gwaii
Posted by . at 5:12 PM

Email ThisBlogThis!Share to TwitterShare to FacebookShare to Pinterest
Labels: Restrictions on travel to Haida Gwaii now in place