Everything seems to be coming up roses for Premier John Horgan, as he hosted provincial journalists amid the roses of the Legislature on Thursday, speaking to a range of themes for the Thursday morning availability.

Some election speculation commentary from the Premier has certainly caught the attention of the two main political opposition parties in the province,  that after Mr. Horgan offered up some thought as to when British Columbians may be next heading to the ballot boxes during an afternoon media conference.

After first expressing his concerns over some of the growing incidences of a lack of attention towards social distancing and how our progress related to COVID is slipping a bit, the Premier wandered into the political theatre in reply to some quesitons from reporters on hand.

The conversation on the potential for an election can be found on the video above at the 25 minute mark.

The Premier's notes brought both Liberal leader Andrew Wilkinson and interim Green Party leader Adam Olsen to their Social media feeds on Thursday, with both observing that the middle of a pandemic is probably not the best time for an election and in the case of the Greens a reminder that with their support, the current minority government situation has worked quite well, particularly as the province has tackled the challenges of COVID. 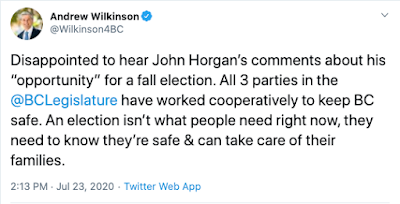 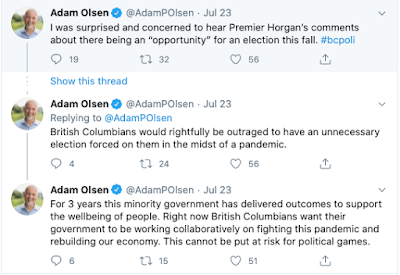 The idle chatter on the prospect of a provincial election comes in the wake of some very positive polling numbers for Premier Horgan, in a recent Insights West poll released July 14th,  the results noted that 68 per cent of respondents approved of the work Horgan is doing, up 17 points from the last poll.

The Insights West poll, is one of a number of recent polls that delivered positive reviews for the electoral prospects for the governing NDP.

For more notes related to the Legislature see our archive page here.

Further notes on the election speculation and other provincial political themes can be reviewed through our political blog D'Arcy McGee.