The 9.3 million dollar Terrace round-a-bout project has been declared complete, with Federal, Provincial and municipal leaders celebrating the final work on the major road infrastructure project on the east side of the Skeena Valley city.

The investment in the highway through the Terrace region replaced the four way stop at the junction of Highway 16 and 37, introducing the round-a-bout replacement concept to the Northwest, something which as Terrace mayor Carol Leclerc noted today took a bit of getting used to for area residents.

“I have heard a number of positive comments about the roundabout at the Highway 16/37 intersection. It presented a bit of a learning curve for some folks at first, but generally speaking, people have been surprised by how easy it is to navigate and how smoothly traffic flows. Even those who were a bit apprehensive about using the roundabout seem to like it. I think it is a great addition to our local highways.” -- Terrace Mayor Carol Leclerc

The federal government provided 1.7 million dollars towards the round-a-bout, while the Province of British Columbia invested 7.6 million into the Skeena riding project.

Federal infrastructure minister Catherine McKenna and her provincial counterpart Claire Trevena both made note of the improved safety that the project delivered and how it will make the flow of traffic easier on the major connection between Prince Rupert and Prince George.

Their comments, as well ad more notes on today's announcement can be reviewed here.

A more expansive review of the project can be found here.

For those that may not know the proper etiquette for transiting through a round-a-bout, this graphic from the Ministry of Transportation provides a bit of background on the driver protocol. 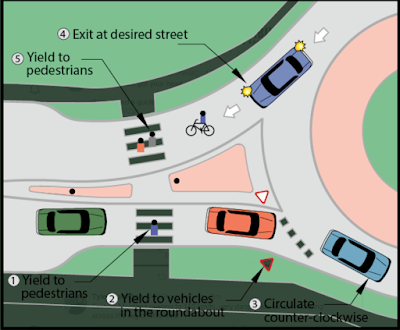 The Terrace round-a-bout, was one of two high profile highway projects introduced over the last few years. The other large scale project, the Mile 28 overpass has since been put on the shelf for now; with the province having suspended any further review of infrastructure plans for the proposal.


That ambitious infrastructure project would have removed the last major road level railway crossing along Highway 16.  It was put on the shelf  in May of 2019, with on date listed at the time for any review for its momentum.

For more items of interest related to transportation along the Highway 16 corridor see our archive page here.
Posted by . at 4:22 PM