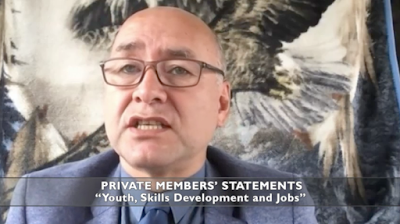 The topics of youth, skills development and training for jobs made for a theme for discussion during the Monday morning session of the Legislature.

NDP MLA Doug Routley led off the conversation, providing a review of some of the government programs put in place over the last three years that have provided for training opportunities in all corners of British Columbia.

As part of the dialogue for the day, Skeena MLA Ellis Ross participating remotely this week as part of the hybrid Legislature process provided for some background from his time as a Haisla band leader; highlighting for the members of the Legislature how his community had pursued training opportunities and the positive benefits that they have provided for a cross section of residents of the region.

My band is a successful band, mainly because we got away from the politics of class division. We stopped talking about big, bad government and big, bad Caucasians and the big, bad elitists and the big, bad rich people, and we got down to facts.

Building a future for the next generation was part of my previous life, not just for youth, but all residents in Skeena as a whole. In fact, my band purchased a private post-secondary facility to prepare Aboriginals and non-Aboriginals alike for the proposed projects in Kitimat. Youth training is a great cause. But we had learned some expensive and tough lessons, like how difficult it is to get youth into training programs when they can't see the goal.

This was told to me personally by some of our members that completed our training programs, at our insistence, but became angry when they discovered that there was not a potential job waiting for them.

Framing the discussion from how the Haisla engaged with the LNG industry in the northwest, the Skeena MLA provided a snapshot of how the training opportunities have created opportunity for all residents of the Kitimat area and beyond.

It's the reason why my band and other First Nations reached out to LNG and asked that our young people, local people, Aboriginals, non-Aboriginals and women be included in the LNG initiative. As a result, more than $2 billion in contracts were awarded to Indigenous and local contractors by LNG Canada since 2014.

Twenty-five percent of the workforce consists of local workers, with 10 percent being Indigenous. A $6 million community investment in workforce development program was established to make sure job opportunities were available once people were out of the classroom.

The LNG Canada Connect program and gear up fund ensured that 64 percent of graduates were Indigenous, and 20 percent were women from Terrace and Kitimat. The outland youth employment program, sponsored by LNG Canada, gave local youth hands-on experience to develop lifelong work skills.

Today is a completely different story because of the opportunities projects provide. For a band like mine, with no resources, these opportunities would never have come without active engagement by the elected band councils like my own.

Mr. Ross pointed to some of the ongoing rhetoric and class division in the province that he has seen and is holding back development and job creation,  calling attention to the other opportunities that have been proposed across Northern British Columbia, calling for wider support for the initiatives that he believes will also create employment for many in the region.

If we're going to build B.C. into a stronger province and a stronger society, we've got to understand the difference between building a strong province versus politics, because we're not doing anybody favours, especially our youth, if we stick to our political rhetoric.

There's a way to make amends, especially when we're talking about the youth. Basically what we're trying to do here is build a future. The groups that oppose LNG and all these other projects without even considering the youth or Aboriginals: you can make amends.

You can support the proposed projects that are on the table today. Like Woodfibre LNG — support it publicly. Olefins out at McLeod Lake, BitCrude out of Prince Rupert, Cedar LNG and KM LNG under Chevron — these are all proposed projects.

They're doing a great job. And They, more than anyone, can provide a future for all the citizens of B.C. — youth and non-youth alike.

You can review his full statement to the Legislature from the Monday morning transcript here, or view it through the Legislature Video Archive from Monday, Mr. Ross's contribution to the morning session begins at 10:42.

For more notes related to the work of the Skeena MLA in Victoria see our archive page here, for North Coast Residents are Legislature archive page can be reviewed here.
Posted by . at 10:10 AM