A significant passing in the Terrace area has been marked by many over the last few days, with Skeena MLA Ellis Ross the latest to pay tribute to the life of Bill McRae, the long time Terrace resident and advocated for his community who passed away  last week.

Speaking from the Legislature Chamber this week, Mr. Ross profiled the lengthy legacy of Mr. McRae from his time in uniform as a member of the Canadian Army during World War Two, to his long lasting commitment and success in building up industry and community in Terrace. 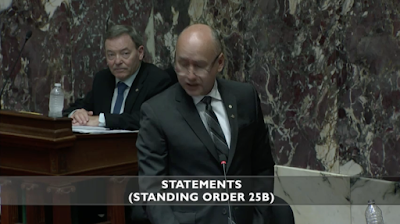 Bill's help in building the city of Terrace is still felt today in Terrace and the surrounding communities. In the late 1950s, he was one of a group of locals who each contributed $4,000 to purchase land. In 1960, after successful lobbying of government, those lands were used for the construction of the Mills Memorial Hospital. Bill was a founding member of the Dr. R.E.M. Lee Hospital Foundation, established to purchase medical equipment, and continued to be an honorary board member well into his 90s.

Bill helped to establish the Terrace arena and the Northwest Community College. He was a city alderman and was named Freeman of the City of Terrace in 1989. This is just a small snapshot of the accomplishments of Bill McRae. Bill McRae passed away peacefully at Mills Memorial Hospital on July 9, 2020.

On behalf of my family and Skeena, I send my condolences, but also my thanks for the incredible and fascinating life and contributions of Bill McRae.

The City of Terrace which had awarded him the title of Freeman of the City paid tribute to the life of Mr. McRae last week as well, the iconic resident of the Skeena Valley passed away on Thursday at the age of 96.

The full tribute from Mr. Ross can be reviewed here, and is available for viewing from the Legislature Video Archive page, starting at the 10:18 mark of the Tuesday morning session.


For more notes on the work of the Skeena MLA can be reviewed here.
Posted by . at 10:49 AM

Email ThisBlogThis!Share to TwitterShare to FacebookShare to Pinterest
Labels: Ellis Ross on the passing of Bill McRae