Members of the British Columbia Conservation Service will be manning the checkpoints at the Fairview Terminal for BC Ferries, with the officers on hand to ensure that no non-resident, non-essential travel is made to Haida Gwaii.

The use of the Conservation Service officers comes as part of the expanded measures put in place on Thursday by the British Columbia government, which has put a ban on non-residential travel to the Islands following the outbreak of COVID 19 last week.

As we noted on Thursday, the province working with Northern Health, First Nations Health, the council of Haida Nation and local governments on the Islands chose to put the ban on travel in place.

"The decision to restrict non-resident travel to Haida Gwaii has been made in a government-to-government collaboration with Council of the Haida Nation, Skidegate Band Council, Old Massett Village Council and local governments, in consultation with the provincial health officer.

The Province will deploy staff to support communities on the mainland and on Haida Gwaii to implement the travel restriction."


BC Ferries highlighted the new measures this morning through their Social Media portals. 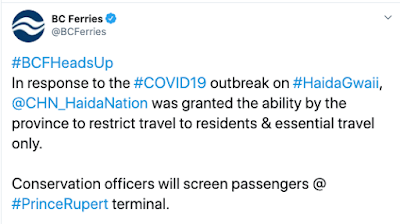 Full details on how BC Ferries is approaching the issue of travel to and from Haida Gwaii can be explored further here.

For further background on the Province's response to COVID see our archive page here.

A wider overview of notes from Haida Gwaii can be reviewed here.
Posted by . at 11:37 AM

Email ThisBlogThis!Share to TwitterShare to FacebookShare to Pinterest
Labels: BC Conservation Officers to ensure no non essential travel takes place to Haida Gwaii