The area around Maverick Mart on 11th Avenue East, as well as Hays Cove Avenue is the staging zone for a fleet of machinery from Kitimat based C an C construction, which today has begun its work on the city of Prince Rupert's major road repair project for the summer.

The work crews began setting up for what will be an ambitious to do list which covers a number of designated areas for attention this summer,  a much anticipated bit of road remediation which will only really tackle a few of the many concerning areas of the city.

You can get a glimpse at the to do list from our notes of May. 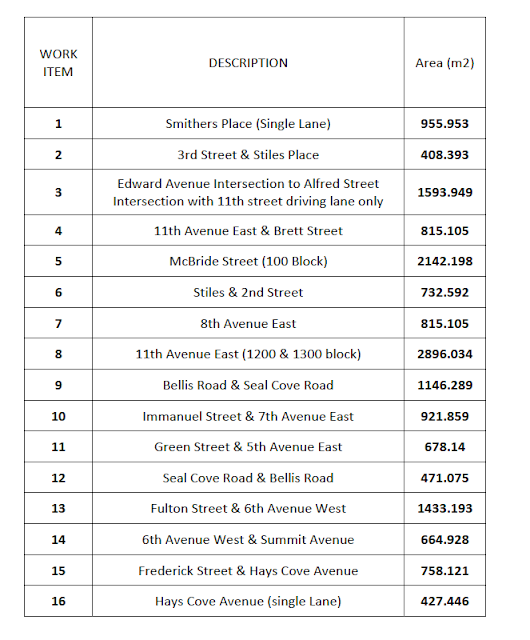 C and C was awarded the contract in June after their bid of $804,000 came in more favourably over that of Adventure Paving which has offices in the city,

The vote on the bid did prove controversial upon its award and the city has received some feedback from the community since that point, the most recent commentary coming from a member of the public at last week's city council session.

Prince Rupert's roads of good intentions, will be paved by an out of town firm with an eye on the cost savings
City staff to recommend Kitimat based Paving company for major road remediation in 2020
Bring on the Prince Rupert paving bids, as the City opens the request for quotes process!


More notes on the city's major paving project can be found from our archive page here.

Further discussion themes for Prince Rupert City Council can be reviewed here.
Posted by . at 2:39 PM