Work will once again soon be underway in Moresby Park as the City looks to remove two aging World War Two vintage fuel tanks from the area, the go ahead for the project issued on Monday as City Council voted to award the contract for the work.

As we outlined in late June, the City of Prince Rupert put the project up for Bid on the BC Bid website, outlining the nature of the work required to remove the fuel tanks, part of Phase Two of the city's ongoing work of remediation in the Moresby Park area.

The tanks are at the centre of the westernmost of three large above ground tanks, located on City property along Park Avenue. 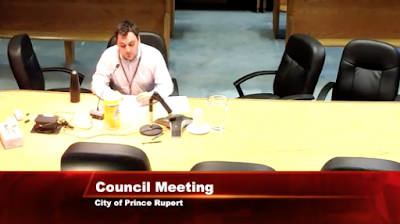 Monday night, The city's Director of Operations Richard Pucci traced some of the history of the past plans for removal of Tanks 1 and 2 and outlined for Council that the City's Request for Proposal received two bids, with the Operations Manager recommending the Bid from Tervita for $799,950 plus taxes.

"As Council is aware, we have removed what we called Tank three, which is the one closest to the old Anchor Inn that was there. And now we are looking at removing Tanks one and two, this is a pretty historic event I think, You know these things have been around for over seventy years with bunker fuel in them and it's an opportunity to remove all that liability from in the park space" --Director of Operations Richard Pucci on the contract award for the Moresby Park tank removal

The history of the city's ownership of the tanks goes back to the seventies when the City of Prince Rupert purchased the tanks from the Federal government on an as is, where is basis, with Mr. Pucci noting that through the years the city has attempted to get the Department of Defence to take on the remediation of the site without much success.

As part of the discussion the City's CFO Corinne Bomben noted that the only outstanding issue was where to take the money from towards the work. With the CFO asking that because the project wasn't budgeted for previously, where would the city be amending the budget to allocate funding.

She then offered up that since the city has received the Northern Capital Grant after the budget process was complete, it would seem fitting to use that money to take down and remove the tanks.

The Northern Capital Grant was announced by the Premier in May of this year, with Prince Rupert receiving $6.5 million dollars from the program.

Following the presentation and discussion, Council then voted to approve the motion to award the contract for the removal of the tanks at Moresby Park

Mayor Lee Brain offered up one final observation on the topic, noting as to the length of time that the tanks have been an issue and how it was one of those projects that needed to be done.

The Mayor adding "that as we have been many times in council, cleaning up our past"

Council previously approved removal of the first of the tanks, known as Tank Three in 2019, that work wrapped up earlier this year in the area adjacent to the old Anchor Inn.

Mr. Pucci's report for Council can be reviewed from the Agenda from Monday night on page 36

You can review the Presentation to Council on Monday night from Mr. Pucci from the City's Video archive starting at the 42 minute mark.

A look back at some of the other Requests for Proposals by the City can be reviewed here.
Posted by . at 12:54 PM