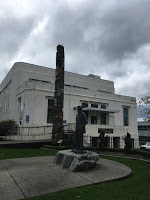 Delinquent Tax properties will be put up for Sale in September as they have in past years, that after Prince Rupert City Council chose not to take up the province on the option to delay the sales until September of 2021.

As we outlined on Monday, the topic made for a report from the City's Chief Financial Officer which was at the Monday evening Council session; with Corinne Bomben outlining the options available and offered her insight for councillors into the impact for the city and homeowners that each of the three choices offered. 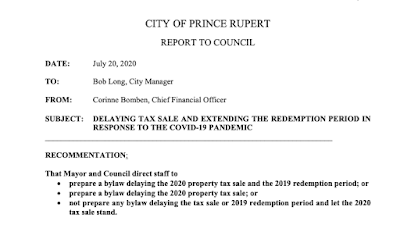 In her observations for Council, Ms. Bomben noted that should the Tax Sale deadline and redemption period remain as it is, that there would be a limited number of properties going to Tax Sale this year.

"Council could let the Tax Sale stand, as it is. While it is always an undesirable outcome to have a property sold at Tax Sale, the underlying issues causing delinquency in 2020 are not due to COVID-19. A property up for Tax Sale in 2020 is in that position because the owner has not paid the taxes for 2018. To avoid the tax sale this year they must pay the 2018 taxes owing by September 28th. Should the property go to tax sale, the owner would have one year to pay all three years of outstanding taxes plus interest" -- City of Prince Rupert CFO Corinne Bomben, with background on the options related to the City's Tax Sale process

Of the 588 properties listed with delinquency, 22 percent owe less than $1,000 and 20 of the properties on the list this year were also on the list last year, which means 50% of the list is repeat delinquencies.

Following the report from the CFO, Councillor Wade Niesh led off the discussion, observing that in his opinion there is no difference this year as those of past years, adding that this year's situation is not COVID related, advising that he does not believe that there is any reason to change the existing deadline and for the City to remain consistent in its process.

"I don't think we should change it, I have taken the approach myself personally for COVID, that I'm going to try and maintain my life as best I can in the same fashion that I had as far as my finances are concerned. Now I know that's not possible for everyone, cause everyone's in a different position, but that's the thing, everyone is in a different position. So, some people it has affected, some people have lost their job, generally speaking I think our community has done quite well with it" -- Councillor Wade Niesh speaking against any delay to the Tax Sale process and deadline for 2020.

Towards more background on the discussion theme, Councillor Cunningham sought out some clarification towards the topic and then  inquired as to whether the City could make the sale that of a virtual sale, Ms. Bomben noted that the city still had to investigate how the public participation process would work when it comes time for the Tax Sale.

For his part, Councillor Randhawa spoke in favour of offering residents the extension to the Tax Sale deadline.

"I think we should give a break to our community members, because a lot of residents have lost their jobs and they can't pay taxes, and so like other municipalities have given a break to their people and this is a good way to help them out" -- Councillor Gurvinder Randhawa

In response to Councillor Randhawa's commentary, the mayor noted that this would be for taxes owed from 2018, while Councillor Niesh returned to his original theme and recommendation that the City  not extend the deadline for Tax Sale.

"If you read it, there is no recommendation as far as, the recommendation is that we direct staff and there is three different options here. So I am going with the one option being Not to prepare any bylaw delaying the tax sale 2019 redemption period and let the tax sale stand, that's what I'm doing" -- Councillor Niesh reaffirming his desire to have the City hold firm to the Tax Sale date for 2019.

As for the vote, at its conclusion the Mayor observed that the motion to not direct staff to delay the Tax Sale had been carried.

However considering the limitations offered by the city's video stream presentation, he did not specify for the record for those viewing at home how that vote went and whether anyone other than Councillor Cunningham, had voted against the motion to hold to the original date in September.

Those notes on the vote will perhaps be included in the official minutes of the Council meeting, whenever they are added to the city website.

With the decision to keep to the regular Tax Sale Schedule, the Tax Sale in Prince Rupert will take place on September 28th.

The Full report for Council can be examined from the Agenda to Monday's council session starting on page .

The discussion of the Tax Sale process can be reviewed from the City's Video Archive starting at the 22 minute mark.