Ambitious plans ahead for Lax Kw'alaams 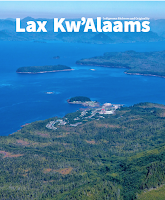 Residents of Lax Kw'alaams have some interesting reading ahead of them, as the Lax Kw'alaams Band Council outlines some of the plans it has in motion for the community north of Prince Rupert.

On Friday, we shared word of one of their key initiatives, that of a sixty unit apartment building for Lax Kw'alaams members living in Prince Rupert, the proposed site set for 11th Avenue East and Edwards Avenue.

However that is just one of a number of projects on the go for the Band Council, with all the remaining plans set for the town site itself.

Beyond the Prince Rupert housing plans, the Lax Kw'alaams Band has updated some notes on other housing for the community, including the completed state of the elders' eight-plex, a housing development on Mountainview and plans for six modular homes.

There is also another twenty units of housing in the design phase with construction expected to take place in the Spring.

The Council has also submitted a $15.8 million proposal to the Government of Canada for a sewage treatment plant and outflow pipe for the wastewater system.

In their notes for residents, Lax Kw'alaams observes how they are one of the last First Nations in BC to continue to discharge raw sewage into the ocean.

As part of their work on the proposal, an environmental study has already taken place and submitted to DFO towards protection of marine live, it's hoped that they will hear more from the Federal government within the next six months.

The Band Council has also secured the funding for a replacement of the water intake line from the upper dam, with work tendered and awarded to Adventure Paving of Prince Rupert for just under 2 million dollars.

Child care is also a theme finding some progress for Lax Kw'alaams, with the province having committed $40,000 per space, totalling a contribution of $2,480,000.

In their update for the community, Lax Kw'alaams officials note that the design phase started in October and we hope to have shovels in the ground by spring.

As well, Lax Kw’alaams has partnered with Coast Mountain College to provide training in Early Childhood Education for interested members.

Early Childhood Care & Education (ECCE) is designed to prepare students with the necessary skills, knowledge and learning dispositions to be provincially certified as an early childhood educator with a specialty in care and education of infants and toddlers.

Also in the planning stages, with research now underway, are plans for replacement of the Administration building, construction of a soccer dome, creation of a water shuttle between the community and Prince Rupert and a committee to explore development of the Lax Kw'alaams waterfront.

You can learn more about all of those initiatives and much more from the Lax Kw'alaams Community update, which is available here.

For more of our past notes on items of interest from Lax Kw'alaams see our archive page here.