A few months ago David Geronazzo was walking around the Prince Rupert Civic Centre looking to move the city's return to normal use plans for the Recreation facilities forward, however as summer has moved into fall, Mr. Geronazzo has seemingly moved along as well.

With the Former Director of Recreation and Community Services now shifting roles and taking on the duties as the Director of Educating Training and Employment for the Gitxaala Nation. 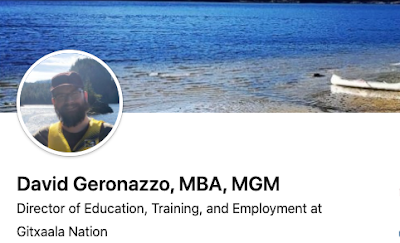 His new focus that of assisting members of the Nation to transition towards many of the new employment opportunities that are arriving on the North Coast.

The Gitxaala Nation has embarked a range of training programs and joint ventures which you can learn more about through their Facebook page and website.

Mr. Geronazzo joined the staff of the North Coast Indigenous Nation in October of this year after spending three years in the employ of the City of Prince Rupert; previously he had worked in the Recreation field in Burns Lake.

As for his previous job, the City posted the Director of Recreation and Community Services job opportunity to the City of Prince Rupert website in mid September.

So far, the City has not announced if they have found a successful applicant to fill the post, which would appear to have now been vacant for over two months.

For more notes on the City's employment themes see our archive page here.