The latest vision towards rebuilding the downtown core will soon come with some tax exemptions, as Prince Rupert City Council began the process of adopting their Downtown Core Revitalization Tax Exemption program.

Council gave first and second reading towards the program on Monday, following an overview of the program from the City's Corporate Administrator Rosa Miller, who outlined the main themes towards the redevelopment of the three newly declared districts of the downtown core region.

As part of her Monday evening presentation, Ms. Miller provided the background and explained the process ahead towards adoption of the Bylaw which will allow for tax exemptions in the downtown core area.
The initiative being moved forward by Council is focused towards revitalization of the downtown and to create new investment in both commercial and housing options for the downtown core.
The program would allow for tax exemption on municipal taxes for a period of up to ten years
The application period would be through a three year intake with full exemptions for the first five years for both new construction and redevelopment, new construction would have ten year exemptions, redevelopment five. 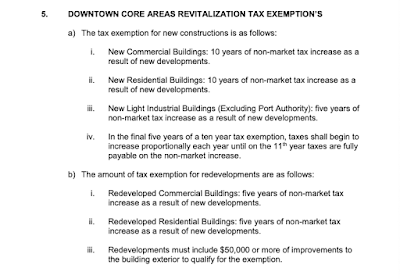 You can review Ms. Miller's presentation, as well as the commentary from the Council members through the City's Video Archive starting at the 20 minute mark.