Despite challenges of a pandemic, Prince Rupert's Dai Fukasaku remains quite optimistic for the future

One sector of the local economy that has seen a significant impact from the COVID-19 pandemic has been the hospitality sector, with local restaurants having to take some extensive measures to keep their establishments moving forward in these last number of months.

And yet despite what must be some extremely challenging times, Daisuke Fukasaku, owner of Fukasaku of Prince Rupert remains optimistic on the future, that as he celebrates his seventh year of operation for his popular restaurant.

He has been exploring some thoughts on those seven years this fall, by sharing his enthusiasm among some of his fellow business owners around town, with a 7th anniversary giveaway towards those local establishments that have helped him on his journey in the city.

The list of those he is saluting and sending a bit of business towards through a gift certificate campaign includes:

The shared celebration for his seventh anniversary is being well received on the Fukasaku Facebook page, where you can learn more about his positive vibes on the local scene and plans for the future.

Towards those plans, his faithful patrons will soon be dining in new digs; with Mr. Fukasaku outlining the vision ahead for his resiliency plan, which will include a move to a larger space in the Atlin Terminal.

The increased space will allow for a 12 seating restaurant and community marketplace where you can source out locally harvested seafood, produce, honey, salt and much more. 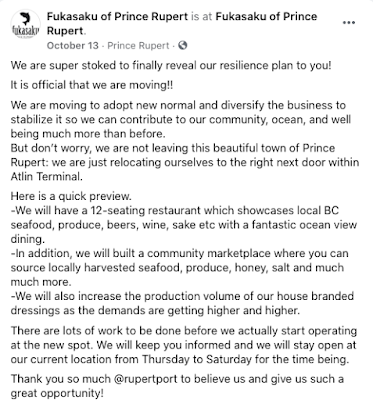 No date has been set for the opening of the new space and all of its impressive options, though once the doors swing open, it's probably safe to say that Prince Rupert residents will reward the proprietor for his steadfast support of the community and his enthusiastic vision for the future.

For a look at more notes on the city's commercial sector see our archive page.