Last week's City Council session featured the monthly update from the Chief Financial Officer as to the pulse of the city's financials, with Corinne Bomben outlining the latest results from the September  departmental reports.

And as they have for a number of months now, the Variance reports provided a glimpse into how the challenges of COVID related revenue reductions are impacting on the overall financial snapshot, with revenue expectations remaining down, while expenditures are still required.

At last weeks twenty two minute session, the council members in attendance had no follow up questions for the CFO following her review and findings to highlight areas where some financial re-balancing will be required by years end.

From last weeks review, a number of areas continue to struggle in the revenue area:

On the waterfront, the City owned and operated Cow Bay Marina has taken in $125,777 in revenue as of September, that still well short of the $219,000 that had been budgeted for at the start of the year.

While they  may not be taking in much money, the city continues to spend on the vessel mooring facility having spent $143,049 in expenses to September, that from a budget of $189,000.

When it Comes to the Expenses Ledger the September results were as follows:

The City's Transit system is also finding 2020 to be year of reduced revenues, with $138,252 collected to September, the budget at the start of the year had estimated revenues of $344,000

Ms. Bomben also called attention to the deficit facing the city's water utility, which is projected to be at the 100,000 dollar mark.

"The utilities budgets are performing as budgeted with the exception of the water utility, it is expected there will be a deficit for the year, by year end, given the reductions in commercial revenue experienced related to the pandemic.
This combined with the increased testing related to the Water Advisory issued in August and again at the end of October from the significant rainfall events, means that we are projecting the deficit to be 100,000 dollars or five percent of the budget in the water utility"-- City of Prince Rupert Financial Officer Corinne Bomben on the City's water utility budget issues.

Later in the evening as part of the discussion on the proposed increases for the city's utility fees, Councillor Cunningham observed on the recent receipt of Provincial funding for COVID-restarts by municipal government.

As part of her reply to the Councillor, Ms. Bomben noted that some of that two million plus dollars in funding provided by the province may be put towards the Airport Ferry, Cow Bay Marina and Transit shortfalls. 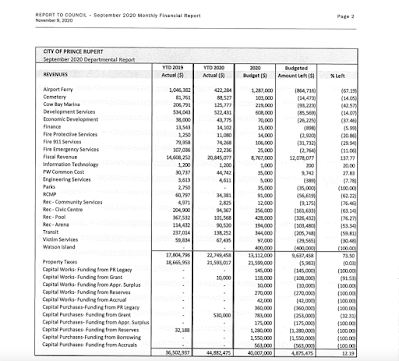 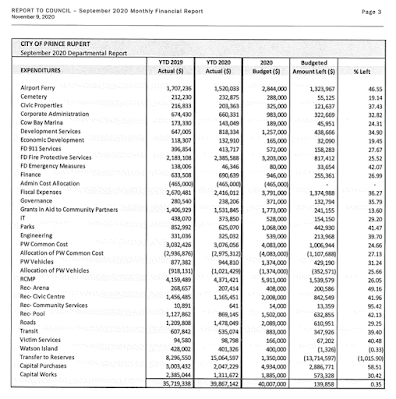 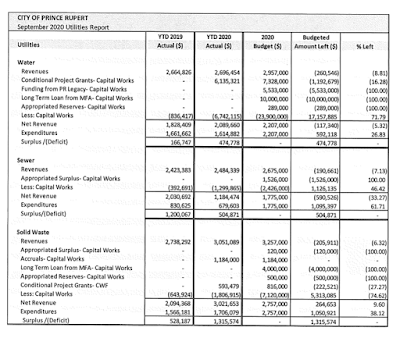 You can review her Report for Council from the City's Video Timeline starting at the one minute mark, the follow up conversation on the Water Utility and the provincial funding comes at the eight minute mark.

For more items of note from the City's Finance Office see our archive page here.

Further background on the November 9th Council session can be found here.